Spike Jonze’s latest film Her has had a lot of buzz lately, not only because it’s a beautifully original film but also for its commentary on the manner in which we let technology into our lives. The film follows the story of Theodore Twombley and his relationship with his operating system (OS), Samantha. If Jonze has seemed slightly irked by the notion that this film is simply a film about technology it is because he is. Jonze has stated in interview after interview that he never intended on making a social commentary but rather, a love story. In the end he has found success in both arenas.

Through its impeccable writing, gorgeous cinematography and truly captivating performances Her beautifully bridges these two themes, resulting in a love story that addresses the trouble we face as a society so engrossed in our technology. Since the beginning of mass media, we have grown up in a world bombarded with images and stories of the fairy tale romance. These become our examples for what a relationship should look like – the trajectory it should follow. When we get through the initial infatuation phase and fall into reality, sometimes things get tricky. Having been taught by the media that our love should look a certain way, we often become confused when those tricks come up. Instead of working on relationships and learning to communicate and understand one another we often assume we are simply “not meant to be together” and call it quits when those bumps come along – “Cinderella and Prince Charming didn’t have any bumps, not like these”. Our society’s willingness to replace face-to-face relations and the ability to access our truest emotions with computer screens, cell phones and emoticons has become an all too familiar crutch to fall on within these perhaps already surface level relationships. Inevitably this furthers the emotional distance we feel from one another; something that we see exemplified in Theodore’s world very clearly.

From Theodore’s job at beautifulhandwrittenletters.com to the video game his friend Amy is designing for the game company ‘Be Perfect’, Jonze shows us that our future society is filled with people unable to understand and fully express their true emotions. The first shot of the film is a beautifully intimate extreme close up of Theodore as he recites an incredibly insightful and heartfelt “handwritten” letter to Chris. He speaks of how he first fell in love with Chris and how his life would not have been nearly as full without Chris in his life. Later in the letter, he says something about the 50 years of marriage they are celebrating and something to the effect of how Chris has made him the happiest woman in the world. This is when you realize he is not speaking of his own life or relationship, as you start to try to understand the context, the camera begins to pull back and reveal he is sitting at a cubicle in an uber hip office in front of a slim computer that is writing out Theodore’s words as he speaks them as if it were true handwriting, mistakes and all. Theodore’s job is to write about true loving emotions, he is tasked with accessing a part of these peoples relationships that perhaps they have not been able to verbalize on their own. While he seems to be rather successful and talented at this, he is complimented on a number of occasions, including being offered a book deal to showcase his beautiful letters written on behalf of others, he is still seemingly unable to access and express his own emotions with another human. Enter OS1, or in this case, Samantha. 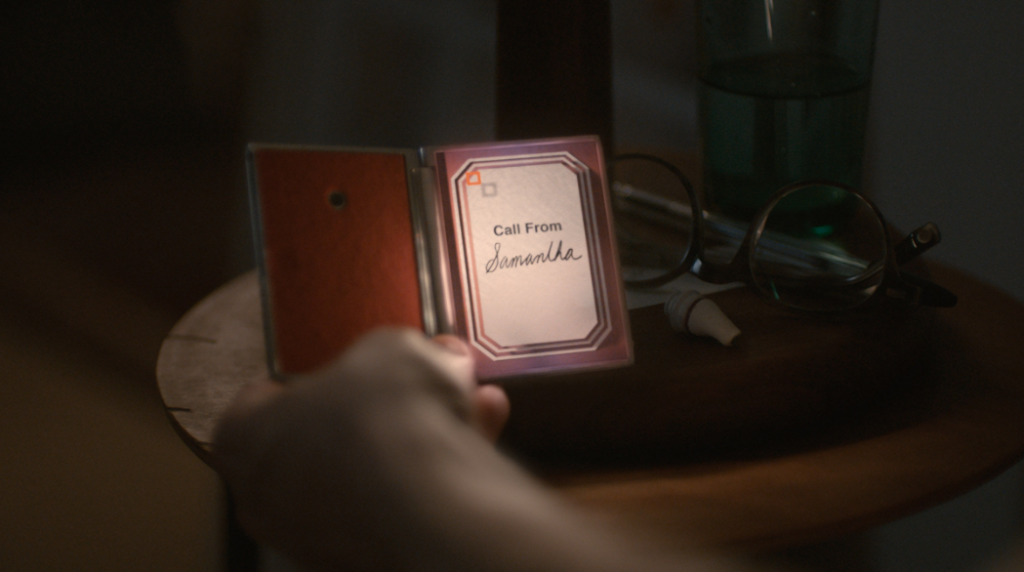 From the moment we meet Samantha, along with Theodore, you can feel the chemistry. This is certainly something to applaud Joaquin Phoenix, Scarlett Johansson and also Samantha Morton for – successfully creating such a strong connection for the audience without actually being physically together. As you watch its hard not to wonder about the authenticity of this chemistry, knowing that Samantha has been programmed to adapt and evolve with its user. Additionally as is previously revealed Theodore is a man looking for a connection, he lives in a world that does not place value on face-to-face relations the way they have in the past. Theodore is very quickly able to open up to Samantha because not only is she designed to suit her users needs, there is seemingly no risk involved. This is simply an OS designed to meet your productivity needs.  Later in the film Theodore reaches out to Samantha after a blind date gone bad. He has been drinking and opens up to Samantha about why he feels his marriage fell apart. He begins to question his own value and as Samantha has learned to she empathizes and relates to Theodore asking of herself “are these feelings even real or are they just programming?” This reminds the audience that this person Theodore is connecting with is not in fact a person; she is merely a programmed device. Yet here he is feeling more comfortable relating his emotions to her than to another human.

There are many moments in the film in which you think the idea that a man is dating his Operating System will be looked at as a strange and unnatural event. Jonze has chosen to present this relationship as completely normal and accepted in this world. This in turn re-assures the audience that this is a true love. These are true emotions being felt and experienced, at one point we are reminded by Amy “whose to say what is a real relationship?” This questions the fairy tale romances we have been taught from an early age. 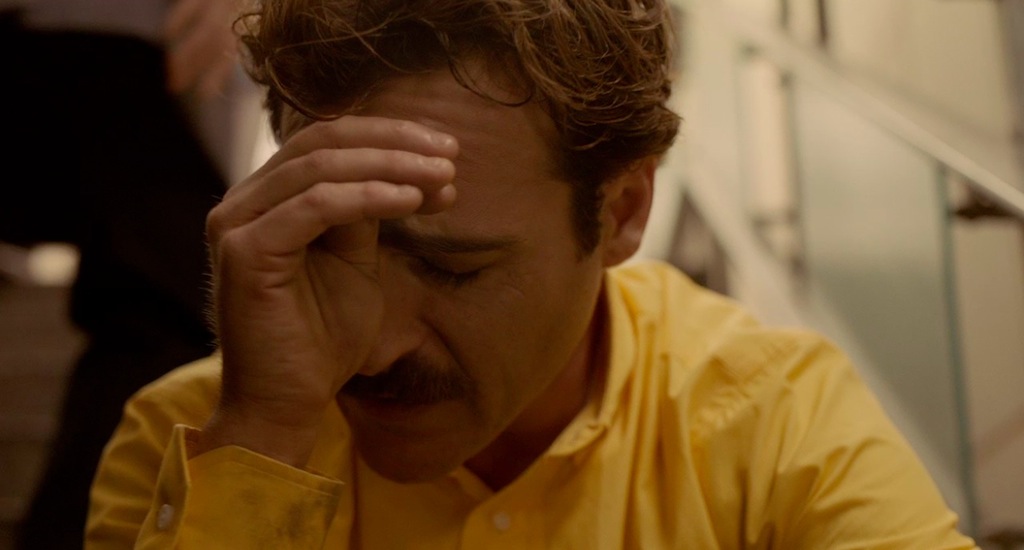 Throughout the film there are plenty of examples of human-human relationship fails. These generally seem to be summed up by a difference in rates of change between the couple, a fear of those changes, a difference in directions of growth, or simply gross misunderstanding of expectations. Initially, Theodore and Samantha would seem a perfect couple because she is literally designed to evolve with him. His expectations are that she stays the same. Alas, she is a computer designed to learn and thus begins to evolve beyond Theodore’s understanding or his basic human capacity to love. In the end they have changed at different rates and that change has not only scared him, it inevitably moves her into another world.

In the end of the film when Theodore tells Samantha he has never loved anyone the way he loves her, she tells him “at least now we know how.” Up until this time Theodore has been unable to fully express his emotions to his ex wife, who is the only person who berates him for his relationship with an OS. Ridiculing him as unable to truly express emotion and so it makes perfect sense he’d begin dating ‘his computer.’ By the end of the film it seems that Theodore has in fact felt a number of emotions and grown from this romance. He is able to compose his emotions into a beautiful, though not quite handwritten, letter to his ex wife apologizing for his shortcomings and expressing his true feelings, that she will always be a part of him and that he hopes she can find true happiness in her life. It’s through his relationship with a computer that he was finally able to understand and express true emotions. So, in the end it seems Jonze has written and directed a wonderful love story, and he has also made a social commentary of the evolution of our technology. It would seem that perhaps there is more good than bad that is to come from the incorporation of technology into our day-to-day lives. Perhaps we can learn from our computers and evolve along with them. 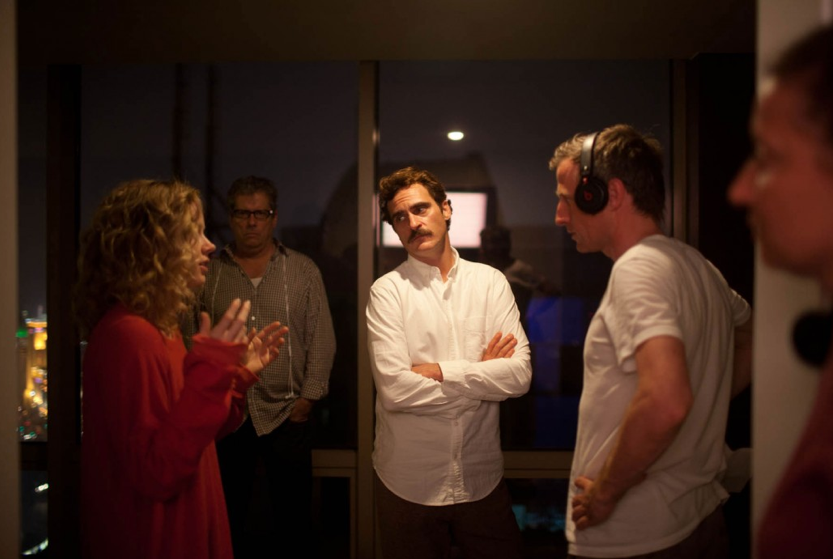 In an IATSE screening and Q&A Jonze relayed that Samantha Morton was the original actress who played opposite Joaquin on set via an ear bud. She performed her parts off screen from a small black room on the opposite side of the stage. All of the performances you see on screen are in reaction to Ms. Morton. And yet in the edit, Jonze felt there was something more he wanted and ended up bringing Scarlett Johansson out to read. Ms. Johansson performed her fantastic role after all shooting had wrapped up. Jonze clearly feels a bit awkward about the way this may look and has nothing but respect and admiration for Ms. Morton and the work she did. Clearly Joaquin’s performance may have been much different had he not had her performing opposite of him during the filming.