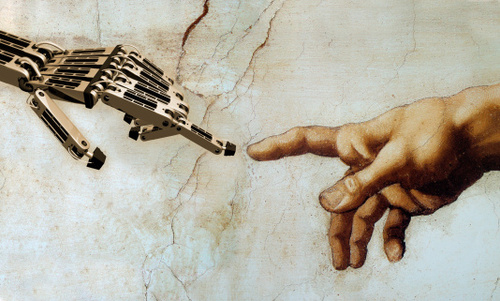 The Gizmodo article about a computer passing the turing test popped up on my social media feed and it got me thinking. You ever hear a young single person talk about having a kid? They are often worried about their own lives so much that the possibility of taking care of another life is overwhelming. That is a pretty responsible view point when you think about it. When you give an eight year old a dog, you know that he isn’t going to be able to fully take care of it because the child has yet to be able to care for itself. Now before we get in to the whole conversation about whether or not its true or what the implications are I think we should apply that logic to ourselves in relation to technological advancement.

So far we humans have proven ourselves to be pretty hot shit on the creation front. At least when you compare us to all the species that have ever existed on the planet we take the cake. No one else has come up with the ability to travel as far or as fast, to reproduce as quickly in proportion to our size, and certainly no other earthling has become capable of actually destroying the planet itself. For better or worse, we have the innovation thing down pat. In fact the only other entity that even resembles our level of creation capacity is God, and we aren’t even sure if he/she/it is real!

Environmentalists may claim that we are a little too good. Endangered Species International sites that of the 44,938 species ever recognized, 905 of them are extinct and 16,928 are threatened. That is pretty tough news to swallow but at on the other side of the coin, the U.S. Patent and Trademark Office has recorded 3,803,188 new patents issued since 1989 alone. That’s not even including things like the Television or  the microscope or the pistol. Balance the amount of species we are destroying against the amount of new inventions  and it’s pretty clear we have this “God” character beat by a long shot, at least on paper.

Or do we? It could be argued that the stuff that we here on Earth was pretty awesome and functional for things like umm… maintaining homeostasis on the planet. And the stuff we are making is kind of like, not. I mean, does the invention of cloud computing make up for the fact that we have a huge whole in the ozone layer? Is the ozone layer even real? Is cloud computing? At the end of the day it is all science talk to us regular people. The only thing we care about as far as the environment is concerned is if it the weather is nice enough for us to get to work and back, and as far as technology, we don’t really care how it works, its basically magic for all we know.

We can go back and forth on the environment and inventions because it’s all just things. So far have yet to make LIFE so God is still the reigning champ in the creation game. We haven’t even been able to clearly define what being alive is. But now those questions are becoming more and more relevant. Now we have computers with human names like Watson, the IBM supercomputer that beats us at Jeopardy, and “Eugene Goostman” who can fool one in three scientists into thinking it is a human being. If artificial intelligence advances at the same rate of iPod models, we’ll have legitimate artificial intelligence by tomorrow or something.

Isn’t it crazy the thing we could fabricate intelligence before we can even define it? Doesn’t that sound a little bit like giving an eight year old a dog for his birthday. But in this case humanity doesn’t have any parents to help raise it. We are such a young species the metaphor doesn’t have to be stretched too far to be validated. Considering only 10,000 years we were literally playing with fire. How irresponsible are we being with our attempts to innovate at a faster rate than we can understand what we are creating? We don’t even know how to treat the people that are already hear.

In a time when a super computer can record our laws and medical practices like Watson is speculated to be able to do it is not so much a matter of what it’s capable of but more an issue of the pool of information it draws from. I’m not worried about a computer being able to read our laws but what about interpreting them? At the highest level it is judgement that is the pinnacle of creation. At the moment we humans make our own judgements or defer them back to “our creator” God.  When a computer has all of our intellect inside of it, how will address the death penalty or abortion when we have yet to define life.

How can humans synthesize a machine to make judgements that we haven’t even mastered yet. Must we program a human bias into these machines or what? Does that make sense? Is it in the interest of the greatest innovation?  I’m not saying we are making ourselves obsolete, I’m asking if we even have the capacity to.

All us humans are, for lack of better word, orphans. We’re all here dealing with our own personal issues, illness, and crises in a game called life but in creating life will we simply spawn a new species to suffer the same fate?

What is the point of creating artificial intelligence that will have no clear purpose like so many of our other inventions? As we get closer and closer to being able to create life, the question I have for humanity is the same one I have for God.

Have you ever spoken to someone who you could not understand at all even though you were both speaking English? Maybe they were from…