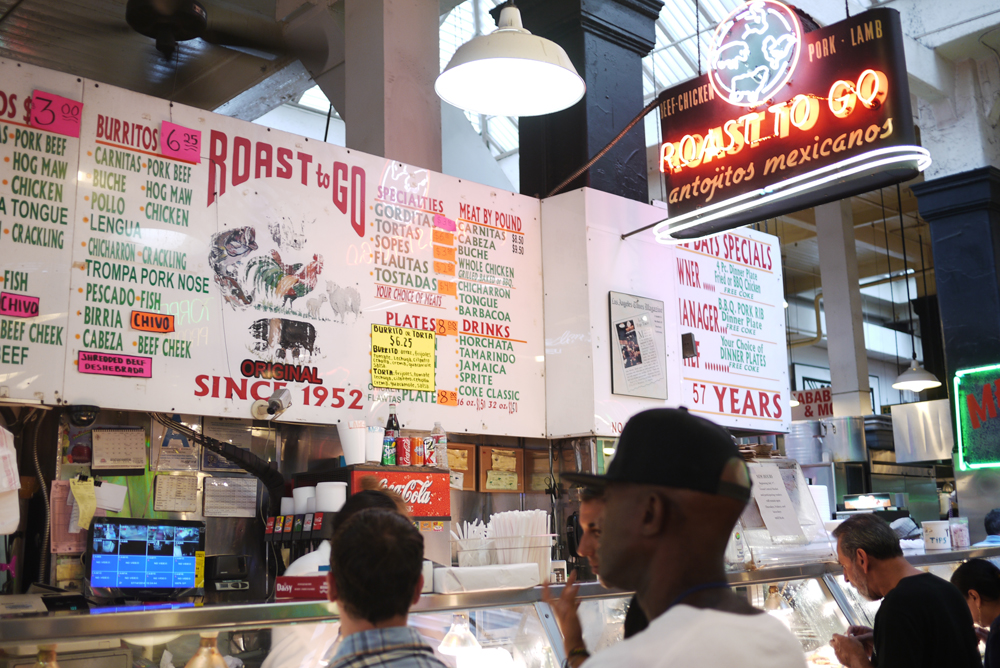 If you would have taken a tour of Downtown, Los Angeles 90 years ago, the city would have looked very different. You would have noticed Angel’s Flight was in a different location before the renovation of Bunker Hill. Back then, the Million Dollar Theatre was a bustling show house that could be likened to what is now the Kodak, and at the center of it all was Grand Central Market. The market opened in 1917 and was the main distribution hub for farmers and grocers a like. Before supermarkets shoppers had to go to a few different shops to get what they needed but Grand Central Market was once place you get, meat, fish, and sundries in one trip. Today things in Downtown have changed, not only has the architecture and landscape of the area been modified so have the people living and visiting here. Those changes are reflected in the market as well. 2012 marked a the beginning of a development within Grand Central Market to better fit the needs of the current resident. If we take a closer look at the changes that are occurring there, we are able to catch a glimpse of what happens when a city changes as well.

The first question we must answer is, “What makes an area nice?” Presumably we would all want to live in safety, with pleasant neighbors, and have the opportunity to make at least some small gains if we choose to sell our property there. All of the forces that effect these feelings are present in the Grand Central Market but they not always easy to accomplish. Each of these touch points comes with their own social and economic concerns and it isn’t always clear whose responsibility it is to address them. 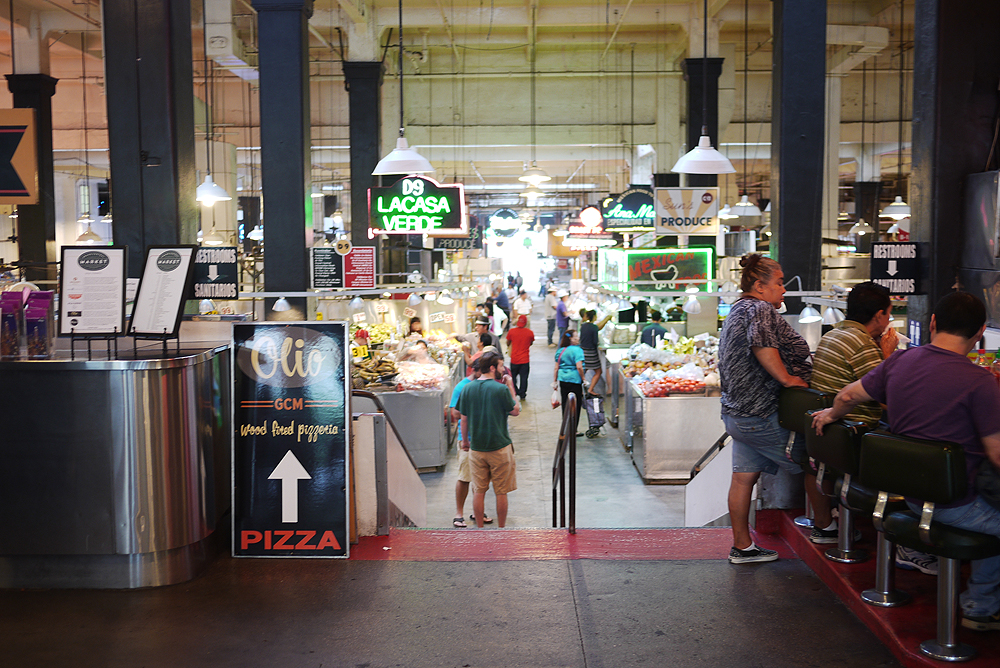 Safety is a something we all want, but it is not a simple feeling to create. Safety from what? Crime? Certainly we entrust the police to maintain a safe environment but, at a certain point we begin to limit our freedoms in exchange. The same is true for Grand Central Market. The security are visible, but not overtly engaged, unless they need to be. In observing an interaction between a security guard and a homeless person, you could see that there was more of an assessment taking place than a judgement. The individual was not causing any trouble but they had certainly effected the feeling of safety in the market.

Outside of crime there isn’t much a police officer can do to manage someone who is simply being rude. Like the person who is running late and cuts you in line when you are ordering breakfast. This is unpleasant, but is so much more of a person to person agreement that can only be addressed at the individual level. In a city, millions of these interactions occur in a day as people drive, work, and shop amongst each other. Often times these social collisions are a product of different types of people meeting in a common place. A business person on their way to work, may use different etiquette than an artist who is having a leisurely morning. Conflicts can also arise between meetings of people from different economic classes. The market offers such a robust selection it attracts people from varied backgrounds but you will also notice that as the vendors change, so does the clientele. The second question is “Which comes first, the community or the development?”

Amber Willat says it is a little of both.  She is a native Angeleno and has some Los Angeles development projects in the works with her family venture, the Willat Group. She currently concerns herself only with experimenting with constructing proper sales funnel for the company. After having spent 10 years since visiting the market she was able to notice it’s changes immediately. Not only had she recognized the newer signage and shops, but she also picked up on how the customer base seemed to have changed as well. She explains a little bit about how that happens in her world. ” In a city, the artists lead the way, they are the early residents that take a chance on a place, and then shortly after comes a coffee shop, or a dive bar to support them. Other people follow in waves and along with them comes the investment in the area.” 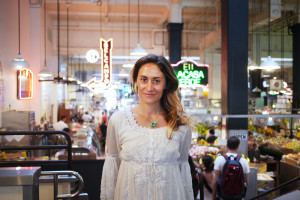 This theory proves true for Grand Central Market as G&B Coffee was one of the first new tenants in the space. Willat explains that many of the economic considerations are at odds with social concerns. “You want to protect the property you are investing in, so you don’t want graffiti on the sides of the building but in order to protect it you often need more police or to hire security and there could be a conflict during that change of ownership based on how it is handled.” Those conflicts can be a source of worry to new residence of an area but without some culture clashing in Downtown the area would be sterile and boring.

Grand Central Market planners seem to understand this. Kevin West, creative director of the market acknowledges the economic need to be sustainable as a business but also seeks to protect its heritage. Kevin refers to the market affectionately as a “food village”. The task is not to completely change the market for economic gain but to give it an update while maintaining its familiar elements, this is communicated clearly in their mission statement.

Our commitment is to preserve the legacy of a historic downtown landmark, to gather the city’s many communities around a shared table, and to nurture the next generation of local businesses.

With this in mind, you will find a mix in variety of things but a combination of price points. If you would like some watermelon, in the summer you can grab some slices at Valerie for $2.00 or you can grab a whole one from the market area for $3.00 a pound. Each has their own pros and cons, like convenience and size, but it is easy to see the difference. Bel Campo, one of the other new tenants in the space sells their farm raised 5.5oz beef cheeseburger for $12.50. By comparison legacy tenant Jose Chiquito, sells his 1/4 pound burger for $4.35. It is not difficult to see the difference in clothing, and appearance of the people that might be standing in one line or the other but each is coexisting together. 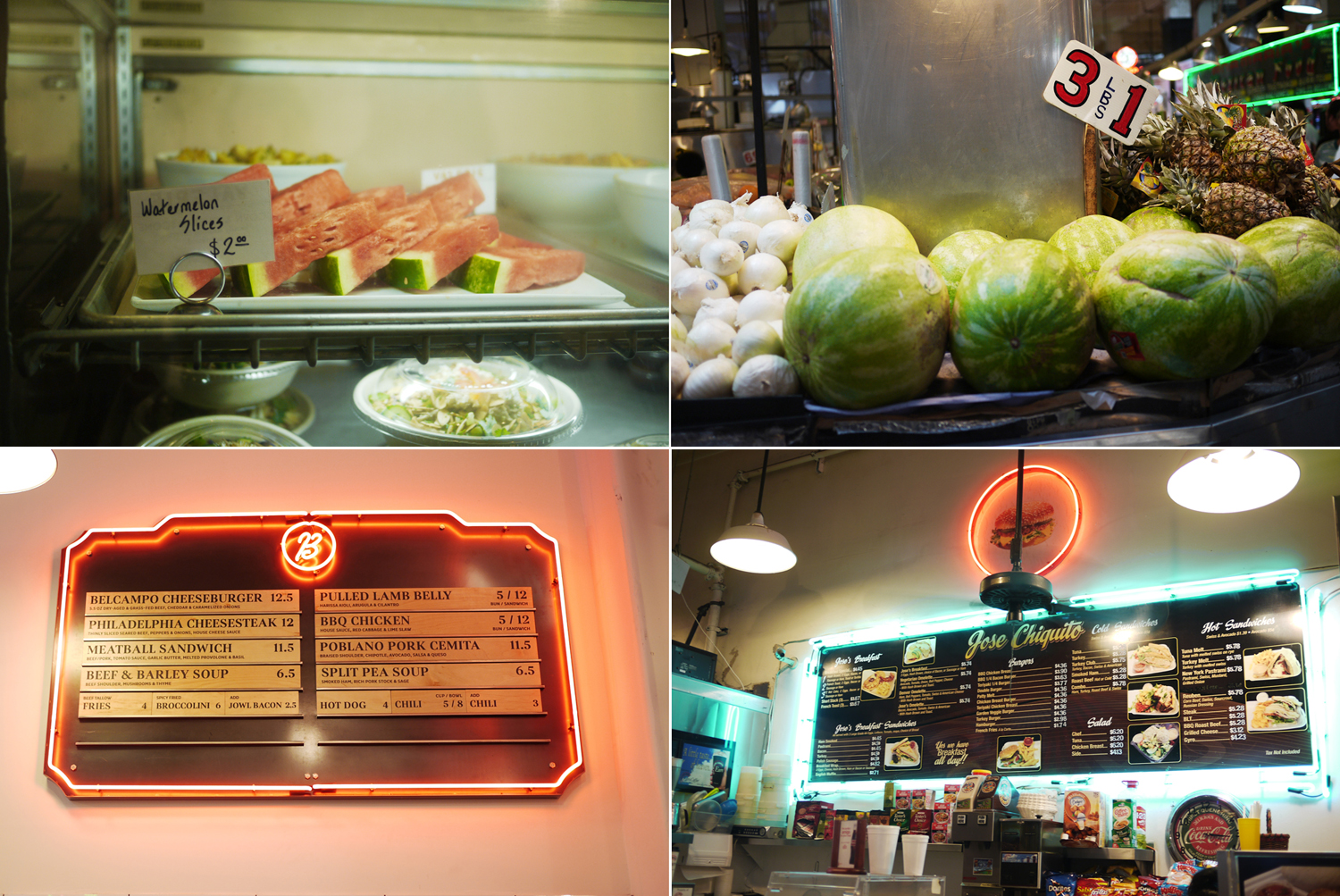 What makes Grand Central Market unique is this balance and blending. Both the custodian and the business executive can stop off at Grand Central Market on their lunch to grab a bite to eat during the week. Both can also bring their family here on the weekend.  The market achieves a harmony, for the moment, that serves the community economically and socially. While here, each of these hypothetical fathers can show their kids all the new things that have come to the market, as part of the changes that have come to the city, in doing so they can celebrate it’s rich history, and welcome its future.

Like any other city or development change will come. The newest tenant at the time of this writing, Mc Connell’s ice cream has just opened and there are still a couple available spaces. Our hope for the market is the same as our hope for the city, that we are able to move forward and maintain that socio-economic  harmony, between old and new, rich and not-so-rich, coexisting together and sharing the great experiences Los Angeles has to offer. 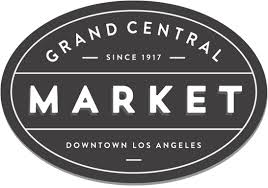 Firstly, this is is nearly impossible to do. To find clear perspective on your feelings about someone can be tricky. In a certain way…