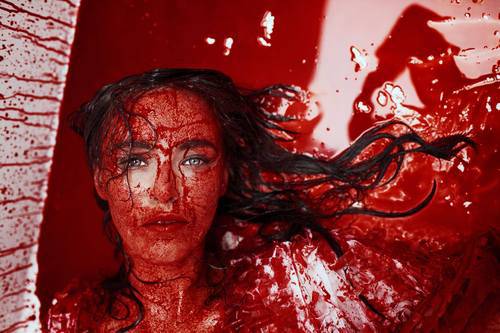 I took a young hiatus from doing music write up’s due to thee fact I couldn’t figure out how to make them feel fluid, not like a music review, yet thoughtful. So much music drops every hour it’s overwhelming (a new Drake video drops just as I was auto saving that last sentence) I took a step back and saw that when people are in search of new music they are really just seeking a recommendation from a trusted source. So now as the music editor of Citizens of Culture I am starting a monthly go to space for you to find HIGHLY recommended music and visuals. Welcome to “Def.inately.Re.com.mended.

I have always believed the music was as important as the visuals. It’s become completely normal, and the new indie artist business model to getting signed. You have to make a great video independently and hope that video gets to the right eyes and get your paperwork right. Last year one of thee best music video’s I saw came to me in the form of the organically dramatic MadAsHell. directed MRK – River of Blood video (Peep thee 2014.Deffery.Awards.)

This is kind of song you would play at a very festive funeral. High in contrast from the very beginning, it starts with the world’s most friendly chimes in one instant then BAM very lage and jarring drums are being beaten into a driving rhythm. Daughter of a Reiki Master Madison Renee Knapp aka MRK is an Los Angeles based artist and performer. “27” is the 2nd single from MRK’s latest album “BLOOD” out now on Records ad Nauseam.

“27” was made with an analogue video synthesizer. MadAsHell approached the 27 video, in a way where they wanted a process that would visually parallel the way MRK’s singing about mortality dread and the fear of dying in total irrelevance. What they arrived at was an iterative process of dumping the final edit to VHS, running that through a Tachyons Plus Opti-Glitch video synth (http://tachyonsplus.tumblr.com/) and refilming different televisions displaying the corrupted footage. They ran the footage through this several times and ramped up the video destruction over the course of the video to capture the feeling of falling apart.

The directing duo MadAsHell is comprised of artists Leila Jarman and Mike Leisz. MadAsHell has exhibited their work in such spaces as CalArts, International ArtExpo, Tate Britain, Athens School of Fine Arts, and LACMA just to name a few.

If you are enchanted with this piece of psychedelia please find more MRK on her FB page and soundcloud. For more ditigal goodness follow and keep up with MadAsHell on their official site and their instagram @glitchdagram.

The City Inside Grand Central Market