After last year’s leaked Sony executive emails, what we all knew- was officially confirmed: Hollywood has a gender equity problem. Anyone who has worked in the industry will tell you that both crews and casts are heavily male-identified. Not only do men actually have more of the jobs, but they get paid more for them as well. At a “Women in the World” event, Amy Pascal, Sony CEO, recently blamed women in Hollywood for not demanding more pay. “They have to walk away. People shouldn’t be so grateful for jobs,” she stated. Even if women were to receive equal pay for their work in Hollywood, that wouldn’t guarantee that they would have access to the same budgets, storylines, complex character development, and sensible wardrobe that men do. Hollywood, we can guess, might still generate content that encourages the kind of wage gap Pascal believes is a result of quiet wheels.

I’ve always believed that one the best revolutionary feminist strategies wouldn’t inspire people to change existing institutions, but rather would create a new vision that looks like the future we demand, building that new vision in the face of the old institution. On Saturday, December 5th, at LA Mother in Los Angeles (a nonprofit multi-purpose creative and event space developed to support female-driven projects), a few brave women proposed to do just that with the first Moonfaze Feminist Film Festival. Premstar Santana, the festival’s founder, was already in the process of developing the festival when LA Mother came on board to bring the vision to fruition. The festival featured 20 films, none longer than 15 minutes, all representing diverse voices in feminisms. Subjects touched on topics that included personal narratives, female archetypes, body image, sexual violence, domestic violence, international rights of women and girls, sexuality, marriage equality, and friendship.

“Papa Dans Maman/Dad in Mum” is a six minute French film about a conversation between two young sisters after one of the sisters hears moans in the middle of the night, coming from their parents bedroom. The older sister hears the younger in the hallway and explains to her what is happening, while discouraging her from interrupting. The dialogue is brilliant and the young actresses deliver the conversation perfectly, allowing the viewer to feel both naughty and innocent as an accomplice. It is a humorous and charming take on the coming of age theme of discovering sexuality, except this time, with a surprising twist at the end.

“DIYU 地獄 ”, a 13 minute experimental film written and directed by Christine Yuan, translates to “Earth Prison”. Cinematography, art direction, editing, sound; all of it composed into a symphony of haunting post-apocalyptic melancholic grey. The film extracts a visceral feeling of desperate and lethargic hopelessness, all the while leaving a trail of desaturated and smutty imagery. A self aware and disaffected 17 year old, her saccharine and accommodating boyfriend, and her emotionally unavailable mother all spend their days within the limited range of their repetitive existence. When her mother transcends and leaves, it becomes even more painfully obvious that the main character’s nihilism may keep her in a permanent state of waiting. 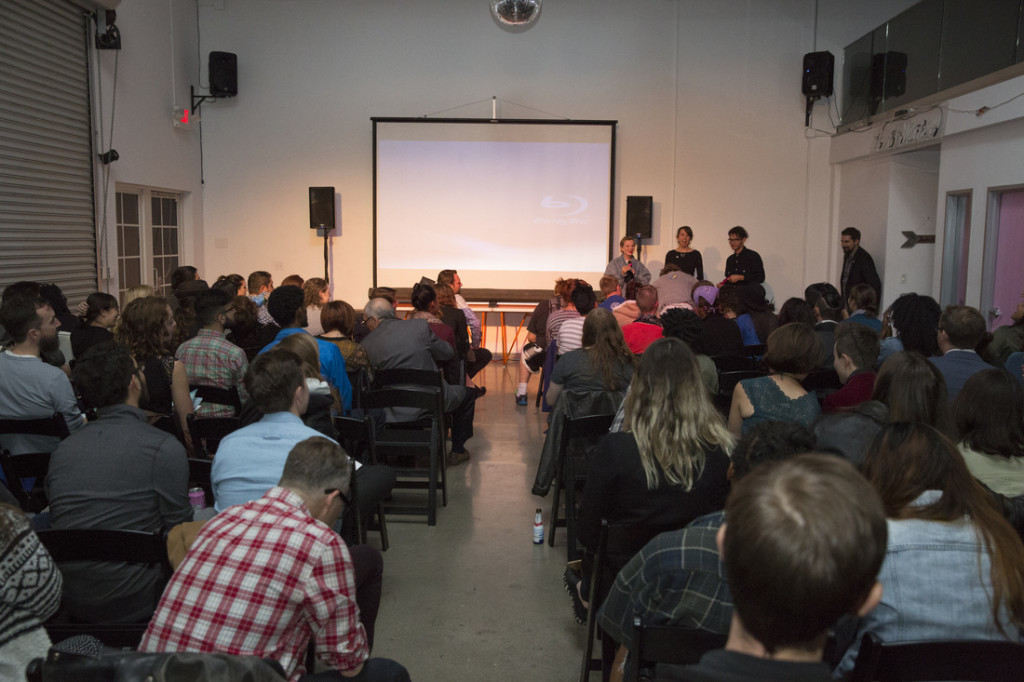 There were many moving and challenging films shown that night, many made me emotional, some made me frustrated, some reminded me of my own personal narratives, some were challenging to my personal concept of feminisms. One in particular, literally made me laugh and cry. “Wedlocked”, a 12 minute film from the US, is a comedy about a happily engaged couple, who are unable to be married because Texas does not recognize the previous marriage of Sydney, one of the betrothed, and therefore, she must move out of state with her previous partner for a nominal amount of time before she can be divorced, and then marry Cameron, her new love. A number of LGBTQIA celebrities cameo as various partners, mothers, bandmates, etc. Sidney has to convince a whole host of these other characters to come along with them in order for Lisa (her previous partner) to agree to go ahead and move for the divorce.

Spoiler alert: they all agree and the last scene involves a previous employer chasing them down in the big van, because he wants to come start a new life as well. By now I was holding back my sobs. This touching comedy about the legalities of marriage equality was about so much more than legislation. We build our families. We build them out of odd parts that somehow seem to fit like perfectly cut stones. When these people support us, we can bring them with us wherever we go, like a portable foundation, and we can build beautiful, wonderful worlds. The families we build as queer people are special families because they are built thoroughly on love and trust. As a radical feminist queer woman, the scene of an overflowing van, full of folks who are coming together to love and support the love of their family members, made me grateful for the family I’ve built, full of bandmates, mom’s and their pets, mentors and friends, past and present loves, and the occasional barnyard animal.

As a third generation Angeleno, I often hear people talk about my home as though it is void of real connections. I can understand that perspective, but seeing the two directors of the festival in “the future is female” shirts, a shirt originally made for the first female bookstore in NYC, now made (with permission) by Rachel Berks at Otherwild, an LA queer feminist shop and graphic design studio, made me realize that for feminists/womanists in Los Angeles, community is rhizomatic and growing. Feminisms is something we have added an “s” to because the notion that people should be valued for being alive; for being human, is played out in ways as diverse as the people who live as and are touched by female-identified beings. Moonfaze Feminist Film Festival represented many narratives, built a community of them, and I can’t wait to see what the next one will bring.

Written and directed by Fabrice Bracq

Written and Directed by Christine Yuan