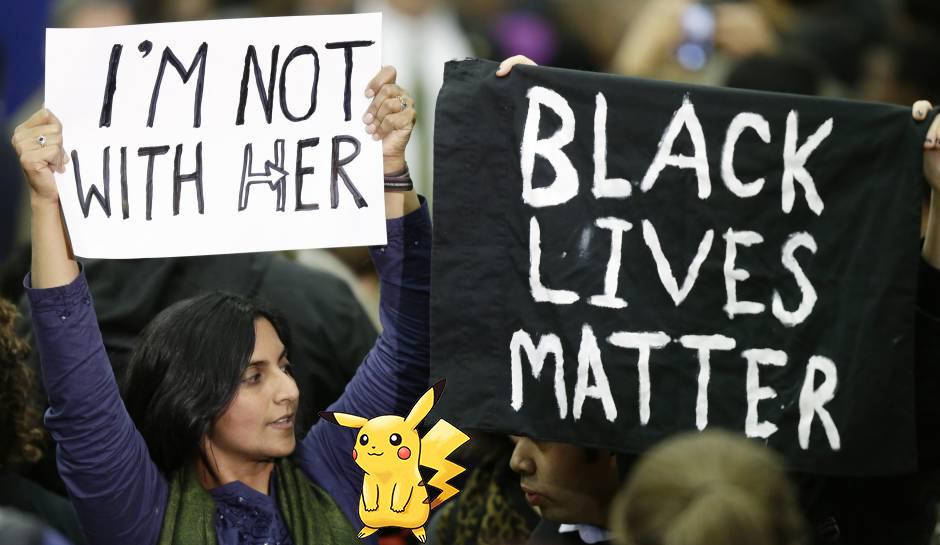 With everything that has been transpiring in recent days the media has been moving at an incredibly rapid pace. Politically, we have yet to be able to reconcile Trump’s success in becoming the republican presidential nominee in our minds and the idea that the democratic nominee Hillary Clinton’s actions were called “extremely careless” by the FBI director James Comey in reference to her use of personal email to communicate classified information, with the reality that one of these two people will be the next president of the United States.

At the same time it seems like everyday there is another video surfacing of a police homicide pertaining to an unarmed black man. The responses to these videos have been everything from firey rage, to sadness, and at times apathy. All the while #Blacklivesmatter continues to protest and organize, at an attempt to disrupt the American status quo.

Meanwhile Nintendo stock soars with the release of their PokemonGo game app for iOs and Android platforms. A game that has swept the nation and capitalized on over 20 years of nostalgia created by the Pokemon brand. A review of the following week quickly shows us how much of the American institution is under duress and these events, however seemingly unrelated events may actually be signs of significant change in our country.

For perspective, let’s look the correlation between who the next President is and police violence. The president appoints the Attorney General who sets the tone for law enforcement policy in the United States. This is the individual who establishes what federal standards state and federal police have to abide by which sets the standard for local city police and sheriffs. In addition to this the President appoints directors of all or our intelligence agencies including FBI, NSA and CIA. This is particularly interesting when we thing about how the priorities for Homeland Security may differ between the two candidates. Wire taps, subpeonas for social media activity, and what constitutes a terrorist ie. who is able to own and legally carry a gun are all decided by these individuals.

The second thing we must look at is nature of gun use in this country as it currently stands aside from law enforcement. We have more guns than people in the United States according to the Congressional Research Service Report and while the NRA supports preserving the second amendment they offer little in the way of gun reform or even best practices for gun owners. This might be useful when considering that black males are hundreds of times more likely to be killed by police even when unarmed. It also should be noted that a petition is circulating to have Black Lives Matter officially classified as a terrorist organization, and it has over 100,000 signatures.

At this point you may be wondering what this has to do with Pokemon Go. Again some perspective is needed here. Pokemon (Pocket Monsters), is a video game that was release by Nintendo in 1996 in Japan and quickly became popular through out America. The general idea is that the lead character is a trainer of fictional digital monsters that can be captured, trained, and traded and fought in a role playing game format. Pokemon Go is the augmented reality version of this game that allows users to play in real life environments. The mobile app is published by Nintendo and created by Niantic Labs, a technology company that specializes in augmented reality. Pokemon Go has only been available for about 6 days and it has become the most used app in the app store, breaking records and surpassing even mega popular apps like Facebook and Twitter. The game requires that you have it open and allow certain permissions such as geolocation while playing but other concerns over these permissions have been made known.

This was particularly troubling to find out because the CEO and founder of Niantic Labs was a former member of the CIA which called in to question the nature of the permissions granted. Full permissions to Google accounts means that not only can Niantic view your location during game play, but also when youare not playing the game, it can access all of your emails and anything stored on your g-drive or anything in your calendar  or purchases as well. [Google permissions have been updated since the time of the original publishing of this article.] From looking at the level of access that has been granted to the game it has is not difficult to see how easily Pokemon Go could be mobilized to become a surveillance tool to track our behaviors and movements. In addition to the Google permissions you give Pokemon Go some access to control certain functionalities of your phone that effect its data use, reception, and available memory.

It is interesting to think about how popular this game has become at the specific time black lives matter is getting back in to the national news. BLM is attempting to shake American sentiment and policy surrounding race. They have not however, been able to capture as much traction as a mobile video game, even in the face of one of the greatest press events from which the might be able to capitalize. Pokemon Go is viral, addictive, nostalgic and fun. Black Lives Matter, is dark serious, and requires effort to stay engaged with. BLM is relying on people’s good conscious to push their campaign forward, but I wonder if that might be a hinderance to their progress. It would be interesting to see how the America would look if Black Lives Matter captured as much as Pokemon Go.

BEFORE & FURTHER: MODERNICA Through The Eyes of DABSMYLA

It isn’t everyday that a major brand steps out of the box and passes its creative reigns into hands that are not celebrity. When they…