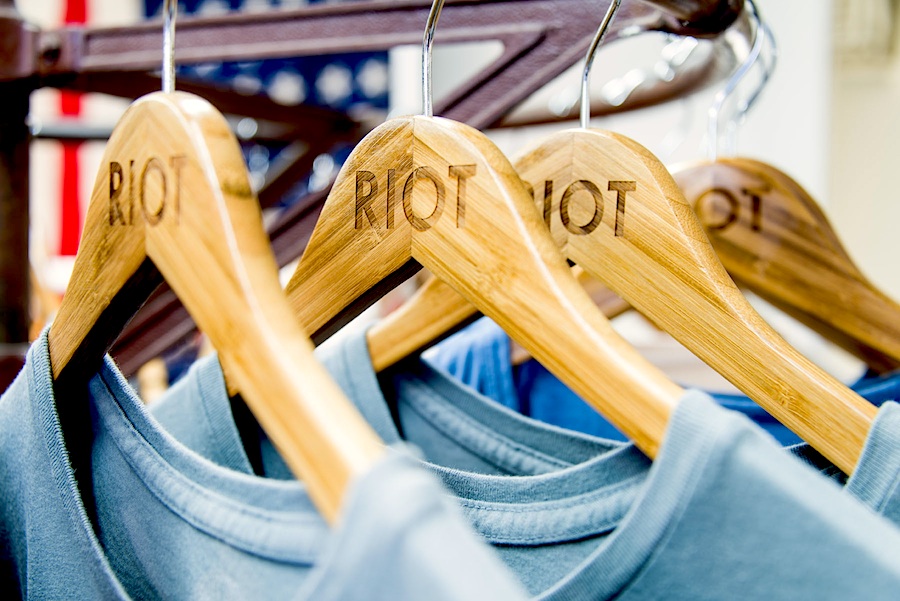 When you think of the American Dream, what do you think of? In so many ways the dream has changed from white picket fences and 2.2 kids. The chase for that dream is a much more diverse pursuit, and the happiness we enjoy is a blend of the simple and complex. This new american dream is something Nate Koach understands.  Nate, along with his business partner Jason Reed, are the founders of Suburban Riot a modern lifestyle fashion brand that is based in downtown Los Angeles. I was able to stop by during this weekends CicLaVia, city wide bike day.

Upon walking into their newly opened retail space you will notice two fixed gear bicycles hanging on the walls. This is a collaboration with Republic Bikes and Nate describes they are sort of symbols, ” The bikes represent freedom, independence, and progression.”

Suburban Riot  embues the modern lifestyle where luxury is found in the ability to come and go as one might please. It is true that the greatest luxury is freedom of choice Nate explains,  “If you don’t have to commute an hour a day, that’s luxury.”

His comment bring to mind the way do look at luxury, so many of us wear minimal jewelry and own fewer possessions than generations of the past. Instead we value technology, things that save us time and improve the quality of our lives. We honor complex devices that add simplicity to routine. Suburban Riot’s designs are simple as well,” it is a brand for people that want to set their own agenda and are ” creatively minded”, says Koach.

In the store you find well constructed menswear as well as basics and themes that transcend into their women’s line as well. Nate and Jason do the designing of the mens line and collaborate with choice female designers for the women’s apparel.

The two got their start in Venice seven years ago and their new store is a vision that has been at least five years in the making. In the early days Nate hit the streets of new york with his samples peddling his brand and trying to get things off the ground. Now, with their first retail location Suburban Riot wants to get to know the neighborhood.

They served free refreshments to the participants of CicLaVia and are looking to plan some events in the near future. “We want to be a place that brings a benefit to the neighborhood”, Nate tells as he describes some of the other products they carry. They sell more than just clothes, they have some after shave and are looking to add more concierge items to their store.

The new luxury as defined by Suburban Riot is one where we are not bound by our possessions but liberated by them. We choose the items we love and those that add the most value to our experiences. Nate Koach aims to create those items and facilitate that progress with his company and his space.

The Body: Fitness, Athleticism, and Movement

Today is the un-official first day of the year. Its the day when millions of people are getting in gear with the new years…