Upon entering Oldfield’s Liquor Room, on the right side of the bar is a sliced open watermelon. Standing behind the watermelon is a man of average height with and athletic build, bright blue eyes and a faux hawk holding a knife that looks like a machete. I need no more evidence for this crime scene, BC Hoffman is a fruit murderer. Upon further investigation we find the cause for the knifing was to create fresh watermelon margaritas later in the night. Not only does BC get to play with knifes but he also gets to play with fire, and when you see his child-like energy and enthusiasm shine through, you be come a little bit worried, but also just as excited about what you know he will create. BC Hoffman is a chef ,mixologist, former MMA fighter, and globe trotter, so it makes since that he would create great cocktails since he is one himself. 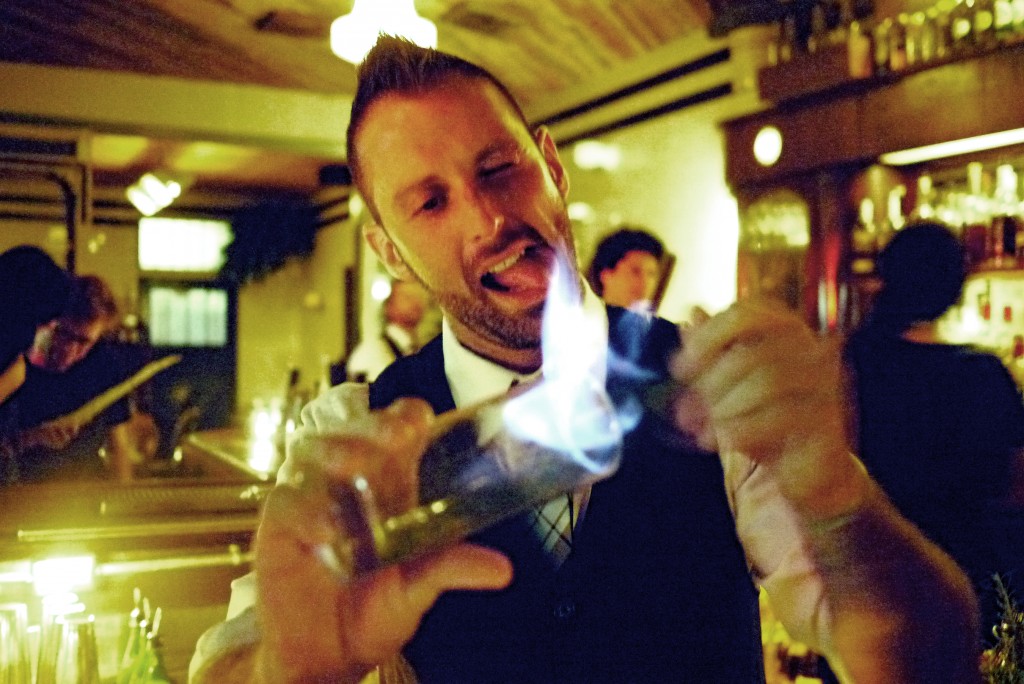 Hoffman got his start in the food industry as a sous chef at Morton’s Steak house out of culinary school. He got his shot as a bartender under unordinary circumstance. There was an accident  with molten butter in the kitchen leaving BC with 3rd degree burns requiring skin grafts, casts, and he was temporarily immobilized in his arm. During this time his employer figured they’d give him a shot as bar back since it was a lighter duty and keep him off worker’s comp. BC took to the bar  and with his understanding of tastes from a bar tending and wine  course taken as a culinary student became a good mixologist.

As I sip my Mexican Godzilla, and later the Apple Pie Old Fashioned he’s created. I note how BC takes his orders at the bar. He asks, ” What flavor would you like to try?”, and gives guests options like spicy, sweet, citrus, and savory. “You have to know flavor profile, not only on your plate but in your glass.” says BC.

There are a lot of people flocking to ever more exotic tastes in the craft cocktail industry. BC seems to mix that exploration with tried and true classics. ” Too many people go crazy with exotic drinks before they get the traditional cocktails under their belt. You need that foundation before you veer out.”, a bit of advice from Hoffman.

At the time of the interview BC was preparing for a trip. Now, in London he is traveling, as he often does, to expand his pallet and learn new techniques, and compete in food and cocktail competitions. He will surely surprise them with his flair for adventure and impress them with his technique.  We’ll keep you posted about his return to Los Angeles but you can follow him on twitter via the link below.

Written By
Maceo Paisley
More from Maceo Paisley
There is a special skill that many athletes, have. Many soldier,and entrepreneurs...
Read More