It is a complex burden to live in this world. Right-brain motivations constantly pull you towards being expressive and striving for personal fulfillment; yet left-brain sensibility tells you following your dreams may not put food on the table. You toggle back and forth until one day a light bulb goes off. You make a decision: regardless of the consequences, you are going to make a change in your life. It is that moment where you open up your life to a new set of possibilities. And it is that moment that Dan Feld is interested in documenting.

Prologue Profiles is Dan’s brainchild. It is a beautiful and inspiring pod cast series that shares the stories of Generation Why Not™ and it exists to encourage you to join in and do what you really want to do with your life. Right. Now. 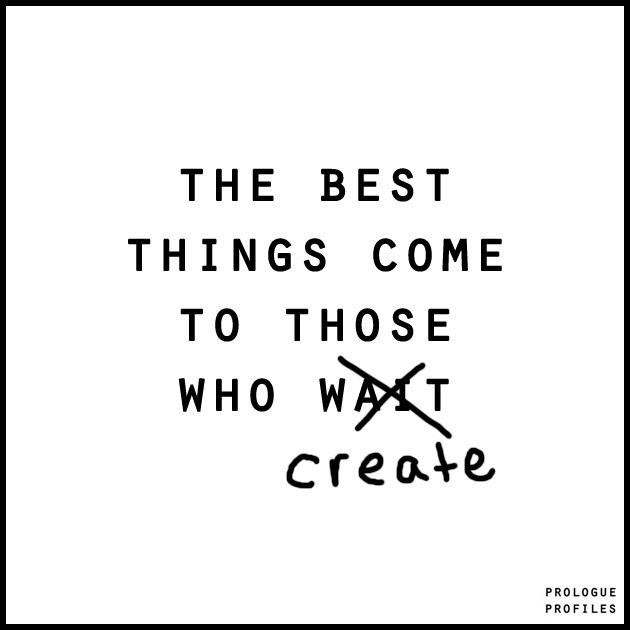 There is currently an archive of 50 episodes, each featuring an interesting individual who moved beyond their fears and stepped into possibility. Among the interviewees are mayors, dancers, chefs, tech entrepreneurs and dentists; it is not limited to people that identify themselves as creative professionals or artists. Dan notes that “[It’s important to highlight] different people on the show; to show all these possibilities.” He knows it is not always about quitting your job and moving to a big city to be a star. Dan actually did the opposite, moving from New York to Mississippi to become a teacher. Unfortunately, this initial attempt at creating a new life was not successful.

Or was it? His so-called failure had sparked an interest in the paths and risks others were taking to realize their dreams. It was an ah-ha moment that led him even further down the rabbit hole of what was possible. I am reminded of Sir Isaac Newton’s apple when I hear of Dan manifesting his idea for Prologue Profiles: “I grabbed [my idea] from the sky and had 8 episodes ready in two months. Before I might say, ‘No, that future is not for me.’ But there was a possibility for a new me and I was saying ‘Yes’ to that.”

There is no better way to close the year than with your eyes toward the future. As you look towards 2014, imagine what is possible. If you need some inspiration, listen to Dan’s own interview below and say yes to possibility. We’ll be featuring archived pod casts from Prologue Profiles monthly and will keep you updated with Dan as he continues to inspire and create.  Saying yes starts with saying “Why Not?” So when you feel like quitting, listen to Prologue Profiles.

Written By
C2O Editor
More from C2O Editor
LA2050 is an initiative for a shared vision of Los Angeles. Led...
Read More