Of all the ways of communicating affection for another person there is nothing so precious as a kiss. It can be infused with a light sweetness when applied to the cheek of a dear friend or can arouse all the passion of the heart when exchanged between a lover. There is a valid fascination some people have with kissing. One of those people is Dominoe Farris-Gilbert. She uses photography as tool to study human behaviors in music, art, and in this case, good old-fashioned scamming.

To dig into this process the Dominoe orchestrated a series of make out sessions where couple, strangers, and non strangers were paired up to  lip lock. One of the interesting components about this project is that some of the couples were paired up by the artist herself based on her own experience of their personalities. “I knew all the participants, but they didn’t know each other so I had to choose partners based on who I thought would have chemistry.” In addition to this instinctual curation she also was informed by a few questions she asked would-be participants like, “Do you already have a partner? Would you like to kiss a man or a woman?”

The project was shot on two scenes, on a couch where the actual kissing would take place, and a white back drop that showed images of people just after finishing. The original concept was given to her by a friend, Marc Smollin and after sharing it with Dominoe, she knew it had to be brought to life. 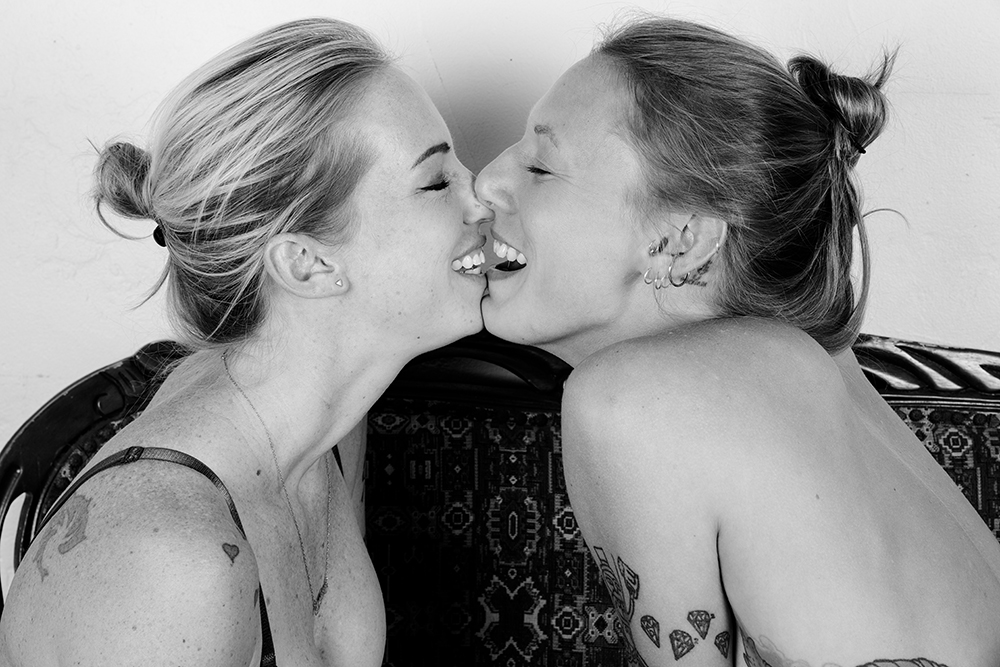 But why kissing? Why not just shoot pictures of people holding hands, hugging or go all the way and take pictures of them having sex? Dominoe gave the impression that there is some special regard she holds for making out. It is such a varied experience for so many that you have an opportunity to learn about the person, and share yourself in a way that allows for you to moderate how vulnerable you are in a moment.  In her book How To Be A Woman, the author Caitlin Moran, says “The best kissers are also the best conversationalists.” Which resonates completely with the idea that there is a language to touch that is a very real form of communication between people.

There is the observation of two people in that dialogue that quenches Dominoe’s thirst for social study but there is also a personal connection to the act of kissing that she experiences vicariously through her subjects.  She admits,”There is something about watching people [make out] that just makes you want make out with someone.” as one of her favorite things to do she states, “When it’s really good, which is becoming rarer and rarer, almost feels more satisfying than sex.”

This is not too far to relate to actually. Sex often comes with the attempt of trying to please, impress the other person, or resist the urge to orgasm too quickly. Both have men and women express feelings of body self-consciousness in sex as well as performance anxiety. With kissing that is not often the case. Even with strangers, the initial hesitation can quickly dissolve if things are going right, and it is far less of a commitment than intercourse.

“Makeout Book” which is set to release this year will capture these physical moments and offer a perspective on them that we don’t always take the time to notice. We still live in a world where various levels of PDA are frowned upon, so it will be an insightful depiction to experience. Until the book is released visit Dominoe’s Pinterest for more of her work.

Written By
C2O Editor
More from C2O Editor
He eats parfait, he wears women’s blazers, and he is too friendly...
Read More