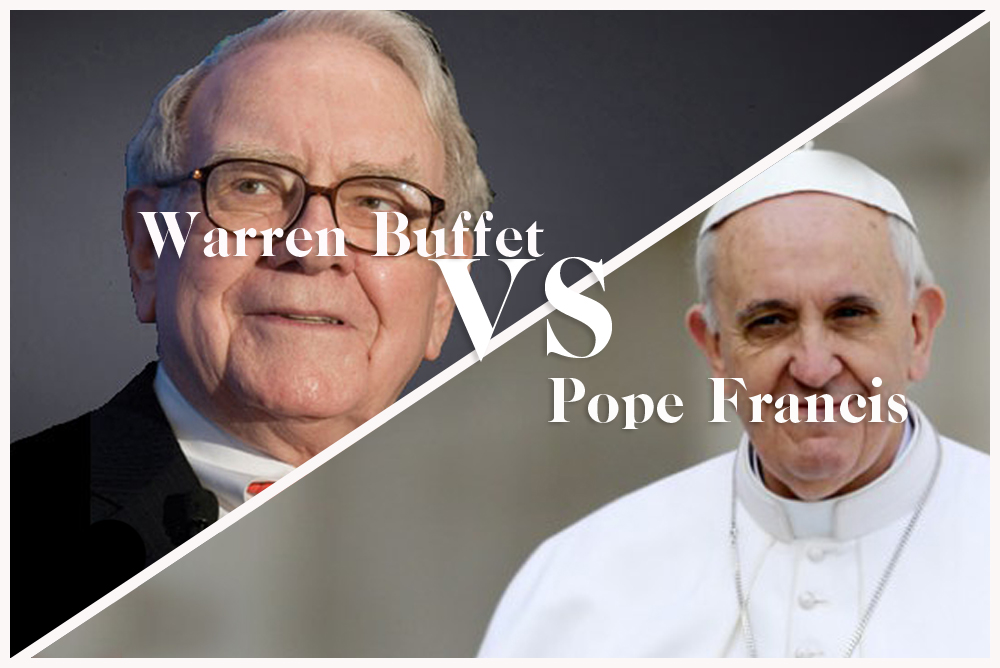 One of the more famous quotes by Albert Einstein describes the limits of knowledge and the vastness of imagination.  His description, sounds not only romantic, but to a theist, also quite prophetic. If we liken imagination to Einstein’s definition then it becomes synonymous with omniscience, and the most famous omniscient being is of course God. Einstein’s quote also can be posed as a question. Is enlightenment more powerful than intellect?

Could it be that the Dalai Lama is more insightful than Thomas Piketty? Is Warren Buffet more profound than Pope Francis?  If both Oprah and Mother Teresa gave you life advice, who would you listen to? Now, most of us are going to want to cop out and assume it would depend on the subject matter at hand. We could argue that Warren buffet may be a money expert, but not necessarily a spiritual one. That may be true in some sense but as we have seen in all the lives of people we have mentioned is one thing. These are all profound individuals whose knowledge maybe exorcised itself in their chosen field but their wisdom is fundamentally sound.

Mr. Buffet is not known to be a religious figure but he is very frugal, not only to be one of the top 5 richest people in the world but even compared to the average person. He still lives in the first home he has ever purchased in Omaha,Nebraska for $31,000 in 1938. The house has an appraisal value of $700,000 now but it is still a far cry from the 63 million dollar home that Bill Gates lives in. Warren is perceived as honest, humble, stern, and very intelligent. It stands to reason that the skills that have made him a successful business man could have lent themselves to making him successful in whatever undertaking he might choose to pursue. It is quite likely in fact that his outlook on life could be applied to other aspect of life in principle. Buffett’s famous quote “Someone is sitting in the shade today because someone planted a tree a long time ago.” Sounds more like a Confucius proverb than financial wisdom.

Even the Einstein quote we began with, sounds existential and not mathematic. Leonardo Da Vinci is quotes as saying ” God sells us all things at the price of labor.”, which sounds more like a bible verse than a quote from an artist.  The discussion ends up taking us back were we have been before. The question of what to do in the now as it relates to the grand plan of things. It might seem that Oprah has taken some tangible steps to achieve financial success in the material world, and the steps Mother Teresa might propose could be more abstract but are we sure that the two are separate.

What would seem clear in both scenarios is that there is a philosophical framework that governs the day to day actions. Each scientist, and business person, artist, and entrepreneur has methods, superstitions, and traditions that guide their steps on the broader level. And they use their personal rules to make decisions that impact them in the moment. These personal ethos are dictated in some instances by their faith and other times by research and study but when you really look at those two things how are they different than meditation and prayer.

Clear parallels can be drawn between what it takes to be viewed as intelligent, and also as enlightened. The Pope Francis, has had to take on a personal commitment to study the worldly languages, but also to find a personal relationship with his faith and belief system. So to has Thomas Piketty, made time for intense reflection on, not only the data he has collected, but what the implications of that information are.

We can not escape the processes with regard to our experience as humans, and whether we apply it to the spiritual or the physical, the fundamentals seem to be the same. Einstein captured our attention with his work in physics but it does not reduce his opinions on philosophy because we recognize his ability to understand great concepts as a primary skill. These primary abilities can be applied to develop both imagination and knowledge to navigate the world with the use of both.

Just for fun, go ahead and vote on who you think is more prolific:

Aside from the food itself, one of the most important aspects of a restaurant experience is the ambience. It is an elusive quality that…