Just as a nation can be divided by a desire for a small government or large government. The design community is also divided by two ideas. If you walk into a modern home with white walls, white chairs and white tables you might think it is beautiful. It could be the sleek subtle perspective created by the dimensions of the objects that just seems poetic to you. Another person could walk in that same room and not value anything there as beautiful because it lacks the texture they value from a more rustic scene. These preferences are one thing to consider when thinking of an object but like any designer, the consumer must consider item’s function as well.

Consider the two hammers pictured. One has been designed to be round on all sides, only exposing the head to push nails in to a surface. It was designed by Ko Taehun to be safer and easier to use. The wholes in the top allow for the nailhead to be scooped inside and by rocking the hammer head the nail can be lifted from its surface. It has specific functional requirements that dictated its design but it has also been colored orange. When so much thought has obviously been put into its function, mustn’t some consideration have been made to the color that was chosen? Why orange and not yellow, there are certainly yellow tools around, but also why not black and natural steel? The color choice is a statement, an abstraction that doesn’t necessarily help your get your nail in or out of the piece of wood the user may be working with.

The second hammer considers color only in so far that it has none. If you were to pick up the two and hold them, they would be of similar weight, and size. These are both design elements dictated by its function. But less concern seems to be placed on the design of the more traditional looking hammer to make some sort of statement. Assuming both hammers interact with nails in equal ways which one would you choose? There is a more basic design, that may speak to a humble person seeking to use the tool. At the same time it could be viewed as boring or unexpressive in some sense. 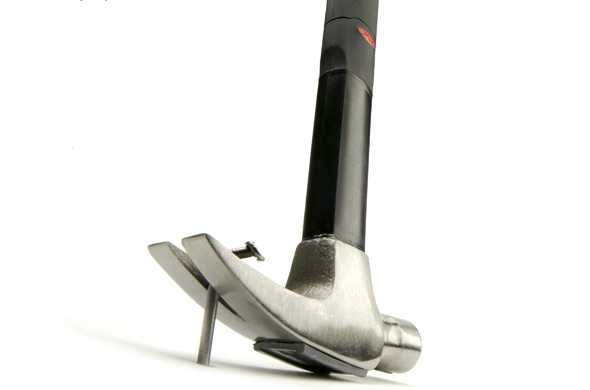 Comparing the two hammers function is not the only consideration. We must also consider price, and many designers claim that it should not cost more to have things that are better designed. It could be a true statement but in order to grade the statement we must qualify levels of design, and we can not do that clearly. Just as one person may value a modern designed space over a rustic one, one designer may like their own work better against another’s. Customers of each designer are likely to agree. It speaks to a persons tastes and temperament as well. A modern template can be subtle to one person and sterile to another depending on their disposition. It is at these core differences that distinguish so many of our purchases. 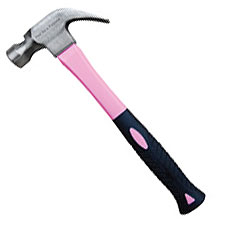 Each time we pick up an object we make an assessment about whether we want that object to make a statement. Once we have decided on that we make a choice about what we want the statement to be. Another in the hammer example is this pink hammer from Tomboy Tools. A clear statement is being made here about the target user for this piece, a woman. The organization responsible for its sale has a message to convey, educate and inspire women to build and use tools so they have created these pink versions of regular tools to do just that. What is interesting about the pink hammer is that beyond changing the color, not much else has been done to alter the traditional hammer design. There are other tools catering to niche consumers that would be lighter, or have different grip styles. Each one of these things effects out purchasing decision and use.  Again, if all things remain constant which would you choose? The Tomboy Tools hammer has taken special note to create a product that they believe will be appealing to a certain group. But in doing so, they have alienated other groups. This is not only men, but women who may not choose to have an object as simple as a hammer making a statement.

Isn’t it statement enough to be a woman using any sort of hammer without the handle having to be pink? Or is it important to reinforce the idea with a physical product from an organization that has taken special consideration to educate woman in working with tools? Note that we aren’t even talking about the use of the hammer any more, but the statement the hammer makes. So much of design is about utility and yet there is so much to it that is about the statement. Not only do we make selections based on the quality of use of an object but also about how they make us feel or present us to the world. Some times it is the aesthetic considerations that truly decide which items to purchase.

Written By
C2O Editor
More from C2O Editor
Walk into Box 8 Studios and depending on the day you might...
Read More