In the mind of the artist anything is possible. In the heart of a collector special value can be found in the most ordinary of objects. Nicola Adriana Rowlands is both, she is not only a collector of objects, but of moments as well. Sometimes Nicky Giraffe, as she is often referred, happens upon the things she collects and other times she creates them. She is currently living in the Derbyshire Countryside ,as an artist in residence supported by Arts Council England but has returned to her home top Los Angeles for her first solo exhibition, For Eyes:An Optical Experience ,  June, 27th at Pieter Performance Space.

As I stroll up to her the first thing I notice is her bright red dress and yellow socks, that happen to perfectly match the red flower in her hair and lipstick. She could be no more precise in her use of color, but that is only the start of what is intriguing about Nicola. She speaks softly, with pauses for deliberation, in a voice that hints that the british accent may be contagious, “I’ve been away from LA for a while so I feel like I am coming home now.” Nicola explains that most of her possessions are still in London and she has little to wear during her visit. How she is dressed today, eludes to her curatorial foresight. If this out fit is among the things she’s packed then she is as careful with her travel planning as she is with her art.

It is no surprise that her words, though a bit jittery still sound poetic, as though they were specifically chosen, even if just for casual conversation. The interesting thing about Nicola is that for as careful she seems with all of her choices, perfection still escapes her. Sometimes pausing from frustration, she is distressed at moments, but for some reason it works. There is an authenticity that permeates through her imperfection. Her care may not be so much a desire for things to be perfect but to create the greatest possible opportunity to communicate.This is consistent with her work as well.

Nicky is a writer and photographer, who, aside from preparing For Eyes her optical appointment exhibition, is finalizing a book of art and poetry as well. She began her studies at UCLA but became disillusioned with art school as an institution. She opted to forego formal education for the moment and travel east. While in Britain she was awarded an UK Government Arts Council Grant to produce the book, On the Road to the Sea . Published by Templar Poetry , it will be launching at Beyond Baroque, July 6th. When asked how she was able to ” make it” in the fine art world without formal education she responded “I am not in the fine art world, I am in my own world.”  It’s these moments of succinct communication that motivate Nicola to create.

She explains further, “I create to get at an emotional universal truth. I want to create work that is active, that projects, and imbibes emotion onto its viewer through composition, [and]color. I hope that through my work I use a combination of reality and imaginary to transport people to somewhere they have been before or would or wouldn’t like to go. I guess it’s about communication and transportation from reality to a familiar surreality.”

For Eyes, is meant to be as much of a reunion as a confrontation with Los Angeles. We all certainly have our relationships with the city but Nicola didn’t proclaim her self an Angeleno Artist until after she had left. As far as objects go, her glasses are the foremost possession she treasures.  “I collect them and they are the framework of my vision, [and]way of seeing.” , and they do frame this vision both literally and metaphorically it seems. She expounds on this with a statement after our meeting:

I am interested in glasses as an apparatus, an extension of the eye–just like a camera works as a mechanical extension of the eye. In a way, they mark me as ‘odd’ as an outsider looking into my own reality, giving me the opportunity to frame and compose resulting in a hyperreality/surreality. It’s a shield or a filter.

Nicola Rowlands has collected over 20 pairs of glasses, no doubt, each of them for a very particular reason. Not only admiring their form or function, but that ethereal quality that transcends both. It is that transcendence she avails to us all with her work, the opportunity to see the world though her eyes, and ours at the same time. Her upcoming show will feature a collection of her photographs and create a moment for us to take home as well if we so choose. 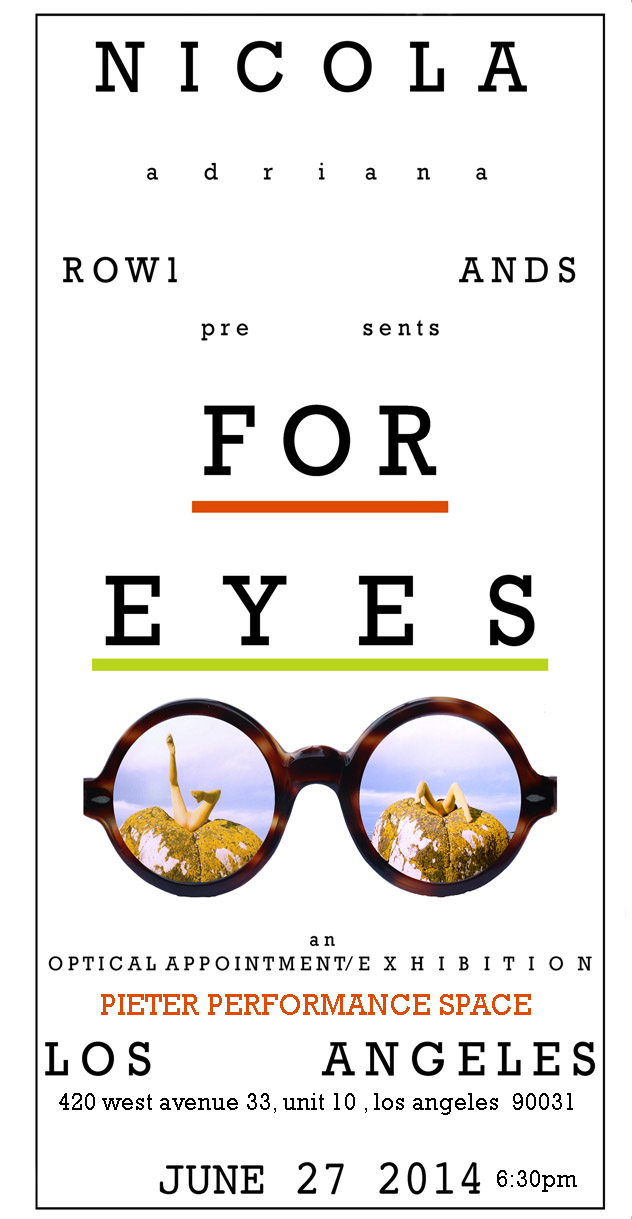