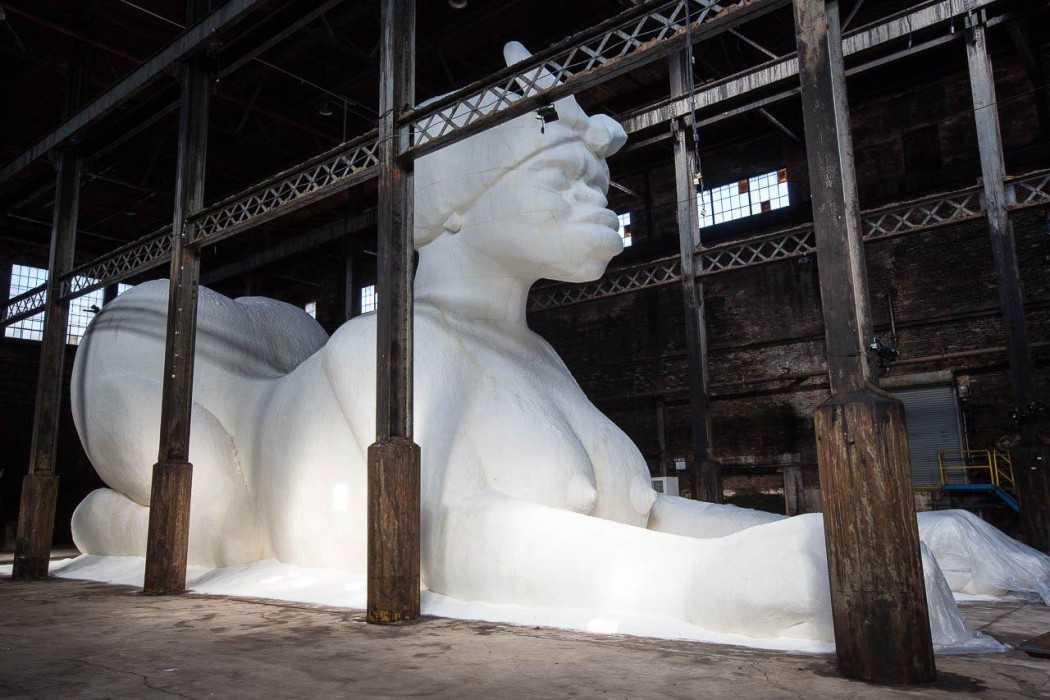 The first time I tried to visit Kara Walker’s “Subtlety” exhibit at the old Domino sugar factory in Brooklyn, I traveled 2 hours from New Jersey only to end up lost somewhere near Queens in the pouring rain, and then get turned away by an intern at the front gate after arriving 5 mins too late. At that point, I had only seen post after post on social media and art blogs about this must-see, incredible exhibit of Walker’s, so although frustrated, soaking wet, and exhausted, I left undeterred that I would see the show before it’s close.

Of course, that meant I would turn up one month later, on the very last day, naturally. I thought it would be an easy visit this time, as I now knew not to take my faulty GPS seriously, and find my own way, with the help of a friend, to the construction site where the sugar factory now stands.

I expected a long line to enter, but as we walked block after block, endlessly trying to reach the end, I thought for sure all of New York City had made some sort of mecca-like journey to this exact spot in Brooklyn. The faces of the people we passed expressed a mixture of excitement, disbelief and genuine concern, their furrowed eyebrows implying “Are we going to get in? What is happening right now?” Even the streets themselves seemed to sneer perniciously at our foolish ambition, with shattered glass glistening everywhere, threatening every step that I took.

Just before reaching the end of the line, the bottom of my foot felt hot and warm. I looked down to see blood running down my heel and along the bottom of my sandal. (You amateur! Brooklyn laughs at those measly sandals!) Shit. My friend ran to get band aids. Fellow waiters in line offered napkins, words of encouragement, and shoulders to lean on so I could take off my shoe. We were all in this together. I limped along, grateful for their sympathies, and the local grocery store. We were all determined to make it.

The blazing summer sun beat down on us as we waited, then walked/limped along to the entrance like refugees hungry for a hot meal. At the gate, we were handed release forms, basically saying that the exhibit is on an active construction site, so please don’t sue us if you lose a limb, or your life. Chuckling to myself that I was going to see this show, even if it quite literally killed me, I signed the dotted line.

The first thing I truly encountered upon finally entering the dilapidated sugar factory was the smell. Years and years of sucrose, now in shades of black and deep brown, were caked onto every single visible surface, and mixed almost poetically with the scents of sweat, metal and refuse. It was overpowering, and a few women in front of me immediately turned around and walked out, unable to handle it. It hit me then that this art exhibit, this experience, whether intended by Walker or not, was never meant to be easy. It was going to be deep, and unpleasant, and powerful, and hard. It was going to address the ugly, the triumphant, the disgusting underbelly of the world’s history with sugar, slavery, and blackness.

Statues of young boys made of resin and several layers of white and brown sugar were scattered around the factory floor, greeting us as we entered. Most carried baskets of sugar that, in this final hour, had now turned into pools of black molasses. Everything was melting: the slight grins on their faces; the sockets of their eyes; in some cases their entire bodies. This melting was irreversible, the damage irreparable, inescapable, and inherent to the conditions these statues had been placed in, as if they were doomed from the start to wither away into puddles on the floor. I walked around them carefully, silently, soaking in the imagery. Some were still standing, the remaining survivors surrounded by pools of black, sugary “blood” that had run like rivers down the factory’s main floor. Others were completely unrecognizable, and had taken on misshapen and monstrous forms. The metaphors and messages in every inch of the room was almost ridiculous.

And then you see it. Her. A huge white sphinx, her head very nearly touching the factory ceiling, with the arms and paws of a lion, the head of a “Mammy”, and her breasts, buttocks and vagina hugely exaggerated, as if to state that this is an all at once inherently sexual, fantasized, objectified and yet powerful being. Some crowded around her, taking photos with friends and husbands like the generic tourists that they probably were. Others couldn’t get close, either offended (or maybe just saddened) by the racist history and imagery she embodied and reminded them of; or in awe of the brazen and bold aura she silently radiated.

I left the factory and cried.

Asia is the founder of www.asiapearlarts.com and her words appear courtesy of www.givemelegendary.tumblr.com

Everything You See In Fitness Is A Lie

We all know the benefits of working out and using all kinds of dumbbells to get the right shape, strength and fitness we desire….