At first glance this idea might seem like a stretch (no pun intended). But upon closer inspection at the factors that motivate the wearing of neck rings, by Kayan Lahwi women and breast implants by American women we see that the two cultures, at least in this way are not too far apart when it comes to the socialization of beauty norms.

You may have seen a photo of a woman wearing rings on her neck and thought, “how beautiful the native people and their customs” or you might have thought “i wonder if that hurts” or any number of other quotations may have zipped through your mind. Taking a moment to understand the Kayan Lawhi of Thailand.  The wearing of neck rings starts when a young girl is five or six years of age and additional rings are added each year.

In other cultures it is the men who wear neck rings, often of gold, but here in the Kayan tribe it is the women who wear rings of brass. Every year additional rings are added and a woman with 36 rings is considered ideal. It is a status symbol and sign of wealth. This is quite likely due to the use of brass as an adornment on decorations and jewelry. This custom is a very highly regarded standard of beauty.

For the most part it is not something that even the women who wear them view as negative. It is commonplace and a natural tradition that is a part of the tribe. It has become so recognized that the Kayan Lahwi (Padaung) are often referred to as the “long-neck” or “giraffe” tribe.

To outsiders this custom may seem awesome, or curious but without the historical context and social traditions being understood it is hard to grasp. 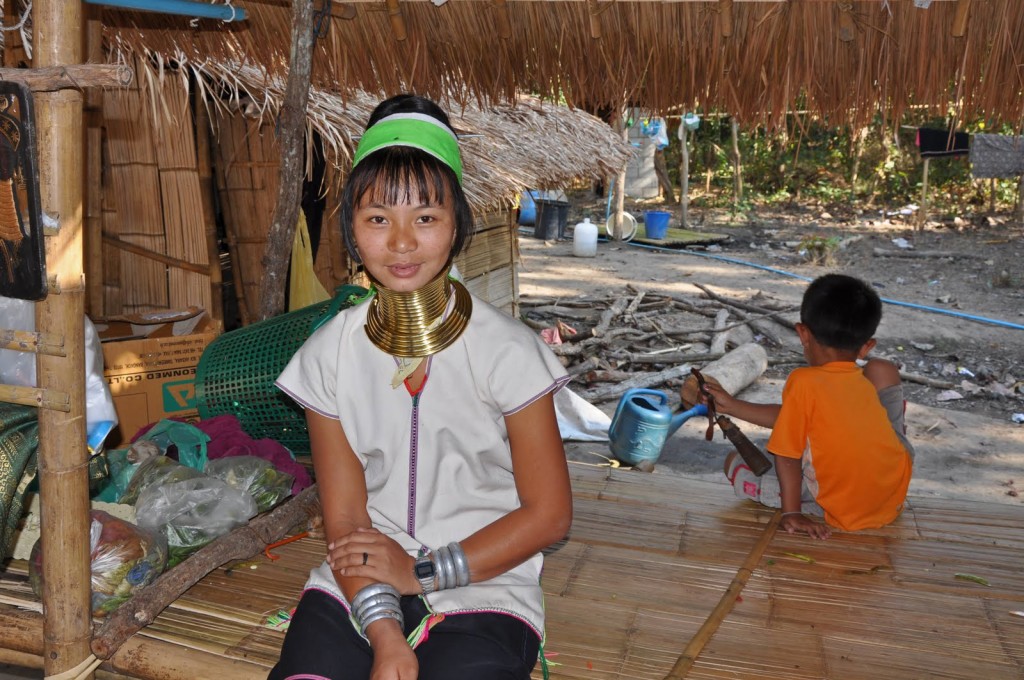 Conversely, here in America, we have our own standard of beauty. Much of American beauty has been definied by the pin up models of the 40’s and 50’s. Pin up models became particular popular among men as the dominant standard of beauty as a result of the use of the images during World War II as a moral booster for the soldiers. Photographs of beautiful women were literally pinned upon on barack walls and inside vehicles to remind the troops what they were fighting for.

This image of beauty was perpetuated in Vietnam and was also later tied to American muscle cars, and motorcycles in the 1960’s. Again these pin up images were used in garages and shops all over the United States.Marilyn Monroe in particular popularized the idea of American beauty as a curvy, voluptuous, blonde. Contemporary media has continued to perpetuate this idea of beauty as a traditional standard with mainstream shows like Baywatch as well as in pornography and stars that fit this image became celebrity.

As this standard of beauty has been tied to such a pivotal moment in American history, as well as link with such a prideful period in our economic success it becomes difficult to separate it from our heritage. As media in American has become more pervasive so too has the idea that we must ascribe to social norms, and for women the impulse to conform to social standards of beauty is one of them.

Medical advances have made it possible for people to elect surgery for cosmetic reasons. In an attempt to reach these prescribed standards many women have opted to receive breast implants.

What is similar between the two cultures is here we have a common standard of beauty that is socialized into the minds of women and men alike. This creates a taste, and disposition to find these traits of a long brass covered neck, in the Kayan tribe, and large breast and blonde hair in facets of the American population.

Both require augmentation of some portion of the body which drastically changes  the appearance of the wearer and an unknown amount of physical and psychological discomfort. In each case it is to be viewed as beautiful and a certain level of self-image is built upon our credibility with our “in-groups” .

The question we must ask is that if this is prevalent both in contemporary Western culture as well as ancient Eastern culture, is it right? Is it simply human nature? Or will we ever come to a point where we can qualify beauty beyond something other than physicality, and learn to appraise it objectively on an individual basis without creating a forced normalized standard for our tribeswomen (and men) to adopt.

Written By
C2O Editor
More from C2O Editor
After last month’s US Government shut down with another deadline soon approaching. We...
Read More