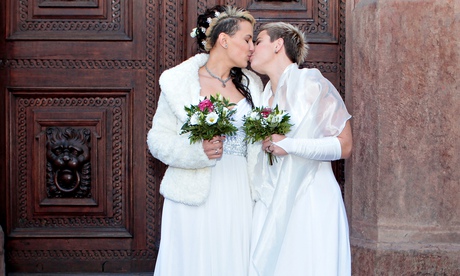 News broke this morning that the Supreme Court has ruled that same –sex marriages now must be legally recognized in all 50 states. This is a great stride in the for the LGBT community and equal rights supporters throughout America. Still, so many are not celebrating this decisions. The ruling was passed down with a narrow 5-4 majority, which is, in many ways emblematic of the nation’s polarity on this issue. Like so many others this is a multi-layered conversation.

Religious institutions in many states are in an uproar because they feel the ruling impugns on religious freedom. This is an interesting notion because marriage is not only a religious construct, but a legal construct as well. This law only applies to the legal implications of marriage. Since there are many Americans that do not have a practicing religion their marriage is already not recognized by an institutional body of faith. The ruling grant legal marriage acceptance in all 50 states but has no mention of attempting to regulate what religious bodies must do.

Marriage is a construct that runs as a deep emotional issue for many people, this is one decision that shows our humanity for better or worse. We often find it difficult to separate logic from our emotion but it is important that we take an appraisal of where our feelings and thoughts are coming from. Whether you are for or against the religious implications of this ruling it should be clear now that the courts have taken a position to uphold equal  individual rights without regard to the gender of the two people being married. Still this legal marriage remains between two people and does not acknowledge polygamous marriages under the law.

We are now forced to reexamine the parallels in the fight for equal rights. A Supreme Court ruling may grant protections and uphold rights from a legal perspective but it will not end bigotry or prejudice. For as long as we have seen LGBT activists fight these battles the struggle is not over. Today is a great day for legal rights but we must continue to think about how we treat people, our use of language, and our own personal biases.

In many states there is still a struggle for family acceptance, fight against bigotry and misunderstanding. Today’s victory should underscore the validity of these relationships and reinforce the message of tolerance.

It is a conflict that has been resolved today in the courts of American but it remains a point of contention in our country’s hearts.

This is an awesome find.  I picked it up at Future on east Sunset in Echo Park. More from Future in the future. Check…