Writing about performance is an interesting task because most often, the performance has already happened, so one is not writing about it so that readers may also go experience it. One writes about performance because performance has a physical and emotional impact that can relay insights into our lives. I did not attend all three nights of MOCA’s Step and Repeat, July 17-19, 2015, however, the last night has given me plenty of insights to share. Unfortunately, I missed the readings by Troll Thread and only saw some of the dancing from Adam Linder’s choreographed piece. I’m going to talk about four performances in particular.

The first is Nao Bustamante’s “Death Bed”. In the performance, Bustamante was laying on a self-propped, slanted board, wearing some kind of Victorian-looking gown, her feet on a burgundy pillow. She was facing away from the entrance, and upon initial encounter, being obscured by a black curtain. On the entrance side of the black curtain was a cellist. A camera focused on her face, through a frame, suspended by wires above her. The tight footage of her visage was then broadcast on the large screen in the main area of MOCA.

The piece was originally conceived for a San Francisco exhibition at Eli Ridgway in 2010. In 2003, she had attended the funeral of Celia Cruz and noted the tableau Cruz had arranged for herself. Bustamante became interested in the exact moment of transformation when one becomes observant object. In her artist statement from the original work, she says, “Like many children I had an obsession with death and the idea of not being or being transformed into something else altogether. I would lie in bed at night and imagine myself, dead, in my satin lined casket and would try to breathe very shallow to bring about a thin state of being, a sliver of awareness of being inside and outside of my body at the same time. Conjuring the worked up emotional state of my family and friends, in mourning, as they passed to pay their respects, I’d console them from above.”

I had not seen “Death Bed” before, so I was not yet intimately aware of how every part was being conducted. It seemed at some point (and I’m sure it did to most people) that the frame suspended above Bustamante held some kind of image that only she could see, therefore creating a scenario, for many viewers, in which she was meditating on a person. Her face moved through a number of emotions and breathing exercises, leaving her at some points, in tears. At one point, watching her close-up on the big screen, I overheard viewers say she was looking at a photograph of her father. When I ran into her in the ladies room (where all the important things happen), and told her the results of my “ear hustle” she was welcoming of the abstracted interpretation and furthered the mystery by declining to clarify. This is where our fork in the road begins. Shall we?

The piece, when I first walked up to it, looked familiar, but I have seen a great deal of her work, and she has a clear aesthetic. One that, in this piece, seems connected to her current exhibition, “Soldadera” at the Vincent Price Art Museum at East LA College (PLEASE go see that, it’s brilliant). This rumination on victorian fashion, death, and the southwest has tentacles that reach into the history of cultural institutions and race, revolution and death, clothing and armor.

It was apparent that death was a theme. On the other side of  a curtain from Bustamante, the cello player was playing something akin to a more depressing version of Mahler’s “Kindertotenlieder”. Her breathing often slowed to a stop, eyes left open. In the context of a film, it would’ve seemed obvious. But here we were, as witnesses to the temperature in the room, the vibration of steps and bass notes and the bell she rang in the beginning of the performance, the shaking in her muscles, the tears cutting and running layers through her make-up. The tears felt like feelings. It’s easy to see why viewers may think she was focusing on a specific entity.

And that’s the thing. She was. When we find a successful work of art, we often find it successful because it is continually sifting through a particular atmosphere that can be felt, both by a cold read, and by someone as close to the piece as the artist’s assistant or the artist’s biographer or… the artist. When we get to know the work a little better, everything we discover, like a person we’re falling in love with, lends value to the first impression. It was a morbid  junior high fantasy of mine to die and be able to watch my own funeral. It feels so very often, and especially at 13, that people will only truly value you, when you are gone. How deeply moving to be able to simulate that without having to die. How powerful to know your worth. 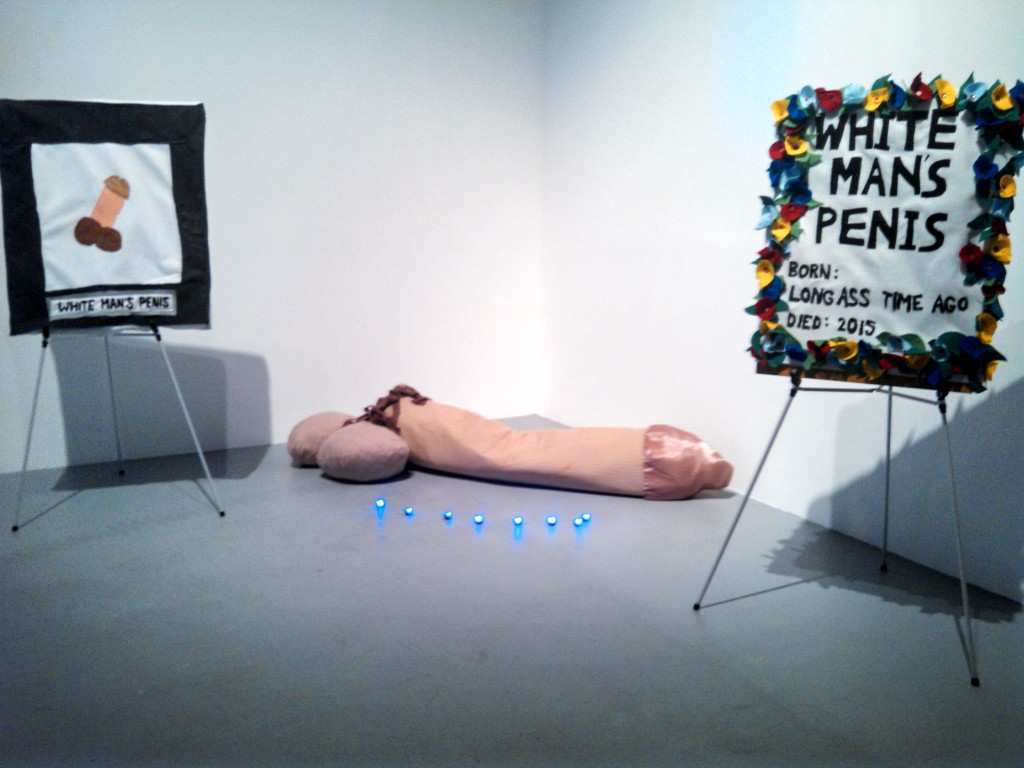 Now, for some more death: Shortly after Bustamante’s performance ended, Kristina Wong took the stage… as a vagina. Originally from San Francisco, Wong is a performance artist whose solo shows, talk show appearances, reality show skits, and writing have garnered her a much loved following for being hilarious, smart, and above all, an activist. Wong sews virtually all of her sets, the vagina included. The ruffled, glittering wall of fleshy fabric was draped down from a pvc pipe attached to the artist, allowing her head to serve as a mouth piece where the clitorus would be. Wong told a number of jokes about the pleasure, policing, and conditions of female genitalia in a traditional stand-up format, with a rapid fire, one-liner approach. This, however, was articulated with a humility and self awareness that, while playing the role of “people pleaser”, was basking in the appreciation of people watching a person who is also entertaining and enjoying themselves. This meta element of Wong’s work, like Bustamantes’ creates a sincerity that is and has always been far more captivating than the contrived chill of our newly departed “irony”.

Next came a segment of the piece that Wong created especially for this MOCA performance. She announced that we were going to be having a funeral for someone we all knew… the white man’s penis. A large, peachy beige, circumcised bolster of fabric, flanked by two bulbous, yet sad pillows at the base, decorated with brown fringe. A pinkish satin mushroom cap posed opposite the pillows from the shaft. It was seemingly delicate in nature, glistening in the lights of the stage. Two picturesque memorials sat on easels on either side of the member… of our lives… lying in state. Wong asked the audience if anyone had been touched by the deceased, and many of us, of course, raised our hands. We were asked to use #RIPwhitemanspenis to tweet remembrances as she read through the many ways we have all been impacted by the white penis. She then asked if anyone from the audience would like to give a testimony about the deceased. Brilliant, spontaneous testimonies perfectly encapsulated white male supremacy by directing a resistance to the racist, agist, sizest, ableist, transphobic, and homophobic gaze placed on those testifying. In a final tribute, Wong asked the audience to each bring up a “dick pic” on their phones and show “100 points of wrinkled light,” to which the audience excitingly obliged. She read a number of… well… “douchey” white guy quotes, and sent the white man’s penis off with volunteer pallbearers and the blessing of Macklemore.

After comedian, Brent Weinbach (I really think the order should’ve been reversed there, Weinbach going before Wong), Open Mike Eagle took the stage. Open Mike had originally been given a much longer outside set, but the rain created a situation where he had roughly half the time, now moved inside. If you’re familiar with Mike’s music, you’ll know that he is a refreshing artist who speaks power from the position of reality (although sometimes virtual). He is a man with desires that reach far beyond self preservation. His concepts explore topics ranging from surveillance to family. He resists cheap stereotypes and as a result, his music is smart and relatable, poignant and powerful, all wrapped in the skin of integrity. He is simply lovely. His wife was in the front, cheering him on with his son, who was then invited to dance on stage with his father. This man has a spark plug of a child, lip singing his father’s lyrics, with the wisdom of a sage. For the last song, he invited another young girl from the audience on stage and she and Eagle’s son delivered the lyrics of what would appear to be their favorite song, “Picture Day.” The song has much darker implications, but the children reclaimed it as a celebration.

The whole thing was wonderful. It was especially wonderful because Eagle’s computer kept attempting to play the original set. We watched Eagle and his computer adapt in real time, in all their cyborg glory. To make things even more interesting, Eagle added another element, an effects controller, that he was using for the first time. As he stumbled through some of the changes, he humbly acknowledge the mess and mentioned a really important element… self love. We saw, in real time, how he navigated through and adapted to a changeup and by the end, he was at his highest, most vulnerable point on the hill that is MOCA. He was completely revealed, and the children and he triumphantly raised a grounded fanfare of relevancy.

The night was concluded by Grammy Award-Winning James Fauntleroy, who was joined by an All-Star backing band that included Thundercat and Terrace Martin. As the band jammed in front of a large video of Felix the Cat, Fauntleroy walked through the audience, greeting everyone like a pastor. It literally felt like Art Church. As if to culminate the whole event with the holy spirit of community; something we both feel and are isolated from in Los Angeles (flash back to Mike Kelley’s untimely passing and subsequent celebratory exhibition just the previous year- another form of Art Church).

The poetry of these acts, for me, is how they seem to navigate some form of pan-teleology. The violence enacted on brown bodies and the internalization of that violence, inching toward an aching for death. Then we imagine that the oppressor is dead… gone. We pause for a moment to agree to look towards something where the oppressor remains absent and we are then navigated through such a strong and valuable sense of humanity. Next, the very thing that, for many of us, reiterates the value of said humanity: family. Finally, we danced in the aisles of the church. I cried, I laughed, and I believe the children are our future. Well done MOCA.