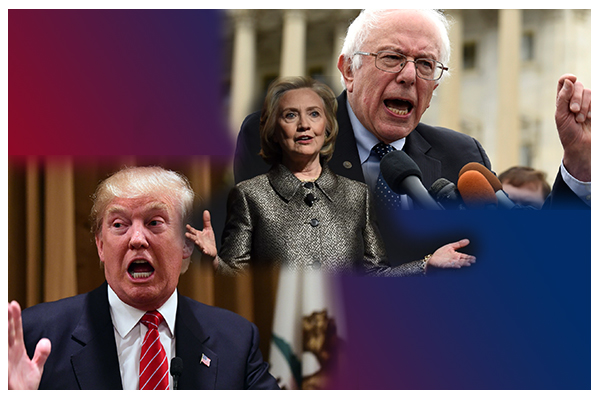 In the current political climate we find ourselves more polarized than at anytime in American History since the Civil War. A cursory review of the candidates shows us how this is embodied in the political spectrum.

On the right we have front runner Donald Trump. Mr. Trump has been quoted as saying he wants to card Muslims and build a wall to keep Mexican immigrants out. He is a billionaire and has swept the presidential scene as a rogue republican candidate much to the dismay of the Republican party.  Donald Trump is not beholden to party alliances and stands on his own values that are firm, harsh, controversial, and ironically very popular.

The left has two front runners with Hillary Clinton, the wealthy democrat with a pedigree for tailored to land her in the Oval Office. Hillary’s weakness is that she has made some questionable policy choices, and been inconsistent on her stance on a number of political issues that challenge her trustworthiness in the eyes of the public. She is backed by heavy donors, is well connected, and has strong global relationships that all contend to impair her judiciousness as POTUS.

Further left is Senator Bernie Sanders who is running on the platform of political revolution as a democratic socialist. Sen. Sanders is straight talking, has a consistent record and employs a powerful scathing rhetoric criticizing the very institutions of wealth that a.) Clinton is supported by and b.) Trump is a member of.

What we are left with are some other candidates (Marco Rubio, Ted Cruz, John Kasich) that fall within the spectrum but none have garnered the amount of interest as the aforementioned. On the left and right we see two figures who have simple platforms to create jobs and protect our borders, and conversely, reel in the billionaire class and establish free higher education. Each of these positions have their merits but what we see is that Bernie and Trump have some similarities in approach though their ideas may be disparate. With straight talking simplicity, both of them challenge the status quo in their own way is part of what is making them popular with the masses.

In the center we see Clinton who is a career democrat but looks more and more like a moderate republican everyday, with her unstable rhetorical foundation she fails to capture the those looking for “straight answers” but appeals to her experience and knowledge for the job. Former Secretary Clinton was recently criticized by Susan Sarandon on MSNBC who sided with Ralph Nader’s idea “If it were a choice between a provocateur and an ‘anesthetizer,’ I’d rather have a provocateur,”said Nader. “It would mobilize us.”  This certainly presents an idea that we should look at more closely.

If we do liken Hillary to the compromising status quo, a middle ground that embodies too little progress to praise and not enough of a difference to establish a change in direction, the question we must ask is, “Does the direction matter at all?” Those who side with the #neverhillary movement imply that a Trump presidency will bring about the necessary discomfort to insight a revolution. But how many living American’s have been through the effects of an actual revolution do they know what they are asking for?

Is the lesser of two evils ever the choice we should accept regardless of who we are? Is this not the very notion of politics at large? Perhaps you are rooting for Senator Ted Cruz from Texas as a republican, does this mean you will support Bernie Sanders should Trump win the republican nomination simply to spite him? On one had we see that integrity, and holding fast to our values is a virtue that we all need to embody. Looking into ourselves and being steadfast in our ideals is exactly the quality that Hillary seems to lack. The other side of the same coin is a death grip to a stubborn position that is out of touch with the reality. A #Bernieorbust position, while passionate, could simply lead to political set backs for would be democratic socialists, when a vote for Hillary might mean at lease some gains.

The same goes for support of Trump, given his relative alignment with the republican party it seems that he is the most obvious candidate to vote for  a right wing voter should,  Bernie win the democratic nomination. With this hyper polarized climate we are seeing rhetoric on both sides of the divide who are unhappy with their parties current frontrunner, regardless of how drastic or arguable the lead they have over the other nominee  contenders.

Historically we’ve seen the effects of extreme socialism, and extreme capitalism. If we all are truly looking to create balance and peace in this world (which may be in dispute)  should we be grateful for whatever gains we get, or buck the system until it fulfills all our demands on time?

We have to ask is extremism every the right answer or is gradual measured change that occurs over a longer timespan what we should be seeking?

Start with the video, it will put you in the proper frame of mind. [youtube=http://www.youtube.com/watch?v=EZL6RGkPjws]   Facts: Slinky is a swedish word for traespiral-…