There are times when it is important to stand atop the podium and raise a trophy in the air. There are also times when that is not so important, like when a cheetah leaps after a herd of antelope in the wild. He doesn’t need praise. He’s just surviving. Pass or fail moments like this don’t require you to be the fastest or even the most agile, you just need to be faster than one.

You don’t have be a wild animal to understand this; The concept is apparent in our lives every day. It might have been in a game of dodgeball when you were a kid. Your odds of being hit are lower when the tosser is indiscriminate about whom they target. This makes the game fun for everyone because no particular person is singled out. The same is true for the antelope. The cheetah is not targeting anyone specific, it is simply fulfilling its natural instinct.

In dodgeball though, there is always that one kid, who’s a little slower, who hides behind other children and uses them as barriers to themselves. Is this ingenuity or cowardice? We have to consider that what puts us up against other people is often unrelated to them at all. It is simply a threat condition that makes the risk of harm equally present for all even if we are not all equally equipped to avoid it.

If the kid on the dodgeball floor were to fend for himself, there is a good chance he would be hit and put out the game. The same concept applies in the wild, the slowest antelope is the one that gets eaten. This process is natural selection. When we step outside of this order to further impair those around us, making them more likely to be the target, we disrupt this natural order. Much of human history seems to indicate that this is a pattern in our behavior.

We’ve all heard the saying it’s a dog eat dog world, however, chances are you’ve never seen a dog actually eat another dog. There is something inherently wired in animals to not prey upon their own species under ordinary circumstances. The food chain illustrates the order in which predator/prey relationships are managed. And, yet, within our society we have appended the food chain to include ourselves.

There is a big difference between competition, capitalism, and cannibalism. The notion of a dog eat dog world supports this cannibalistic approach to human interaction. It becomes self actualizing in society and perpetuates unhealthy competition. True sportsmanship is allows for each kid on the dodgeball court to have his fair shot at a hit or miss without obstruction. In some areas of our culture we have lost sight of this.

The distinction is pretty clear: 1) natural selection as it relates to the food chain occurs between different species, and 2) the other members in the selection process do not impair another’s ability to evade fate. The kid who hides behind the other dodgeball players is unlike any member of the animal kingdom. Consider the  snake’s allegorical depiction within literature and film; this is not representative of any real deceptive character of snakes but of ours.

No where else in the natural world does one animal intentionally trip up another one to improve its chances of survival. The key here is that each species has a predisposed likelihood of being pursued by a predator and has only its inherent faculties at its disposal to avoid that fate. Be it camouflage, poison venom, or size, each species has its own defenses. 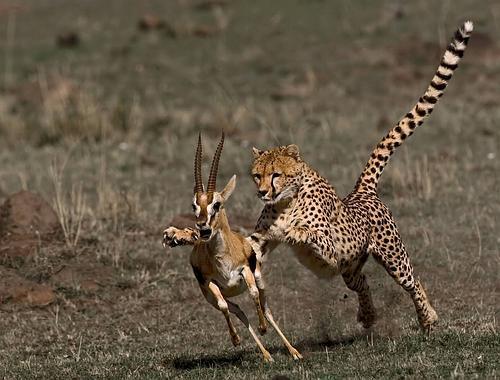 Humans have creativity. But the moment we begin to create, we begin to rewrite the rules. Society itself is a representation of the new rules, and we are no longer bound by an organic occurrence of a food chain, nor are we limited by our inherent physical characteristics.

We have become our own worst enemies, and not just in the philosophical way but in a real predatory way. Our food chain begins and ends with us, and as we rewrite the rules of nature, we must understand that there is nothing to detach innovation from exploitation. The two go hand in hand–humanity’s gift and curse.

Ask yourself, what are our limitations? Which behaviors do we deem unacceptable even when self-preservation is at stake? Do we have enough faith in our inherent abilities to thrive in the world around us? And finally, if we do not, how far will we go to impair another’s abilities for our own survival?

Written By
C2O Editor
More from C2O Editor
No, they are not by the twins. Strolling through the streets lined...
Read More