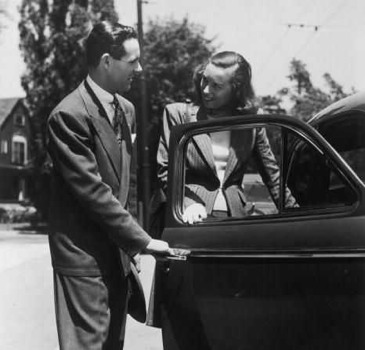 To truly face facts as a society would be to recognize that every facet of our social order is in flux. Not just our economy and environment, but the very fabric of how we express love and build intimate relationships. This stems from fundamental changes in each of our personal identities respectively. To be an adolescent is always a trying time of self discovery. In the past there were rigid social rules that predetermined gender roles and in many ways made things simpler from the outward perspective. We now know that these rigid social structures only serves to suppress the complexities that make up so many of us. This is illustrated by the blurring of gender lines, and social norms pertaining to relationships, sex, and basic manners.With all this change and upheaval of the old guard we need to take a look at some of these constructs and think critically about their origins and meaning.

For some time, chivalry has been a sign for many women that a man was worthwhile. The man who partook in these chivalrous customs was regarded as a gentleman as a derivative of and English aristocrat and even further, a sir. Fair treatment of women was part and parcel to the broader social of code of chivalry.  It is important to note that these behaviors have been passed down for nearly 1,000 years and were not directly related to women, but was a system of conduct for men affiliated with the institution of knighthood. The more contemporary use pertains to women but its most basic use was in reference to honorability manners.

As far as treatment of women, the climate of the era was especially brutal. There was limited protection from the elements and food was often in short supply. A common legal system had yet to be developed, and this made society particularly treacherous for what was known as the “weaker sex”. Women were deemed as weaker not because of their intelligence necessarily but because they are generally smaller than men and socially, their inability to own property. In a world where the economy was predominantly supported by manual labor, this meant a lot. Social status and capability were directly related to physical stature. If you were a big guy, you had more opportunities for work than a smaller guy, simple as that.

We have carried these ideas and customs with us to through the industrial revolution as well, even with the advent of machines. We still held the idea that women were weaker in our minds, and because of this it meant they still needed our protection, because the world was dangerous and they were fragile. Due to the inequities in political agency women were in fact, socially dependent on the protection of men.

Here is where many feminists begin to reject modern chivalry. It can feel demeaning for it to be assumed that you can not open your own door, or carry your own things. Especially since doors are now far lighter than they were 800 years ago. In the modern world, our lives are far less physical and this has leveled the playing field in many areas. So why then does chivalry still exist?

One reason is because this perception of the weaker sex is perpetuated in complex ways. We teach some young boys that they should not hit women, because men are bigger and stronger than women. Pervasively, media still broadcasts the ideas that girls should play with dolls and aspire to be princesses. During adolescence women begin to shed many of their sports and competitive activities for social ones. And the dominant idea of female beauty is still a pageant winner, not a motorcyclist, or cross fit trainer.

As we continue to topple these outdated gender roles, we replace the ones that say “girls should be pretty”, and “girls should be whatever they want”. We should seek to reconstruct our own ideas about what a man and a woman are. Even in our use of language we often describe a woman  that enjoys fashion, shopping, and gossip as “girly” and that classification does not even exist for a man that might share similar tastes.

We must look at the remnants of chivalry, acknowledge them as older customs, and if we are to carry it into the future with us we should adapt it to fit our current culture. If chivalry was once a general code of conduct, then it should return to that. But we should seek to rewrite that agreement to include basic matters of social policy for both men and women that apply to us all without regard to gender. The notion that we should be polite is as old as chivalry itself, and it should remain a dominant theme in our culture. Where we might seek to make changes in the idea that men should respect women, but all people should respect each other mutually. The respect of life, individual choice, and personal freedom are timeless ideals.

Updating our code of chivalry moves it from the archaic to the progressive, it changes its rules from a subtle form of oppression to a radical window for expression. To modify our very code of conduct would be to begin a shift, at the most basic level, allowing for each and every person to have a chance at designing a life of satisfaction.

If we can begin to see women as equal members of society, then perhaps we can see minorities, and the disabled, and the elder as equal members of society as well. Not merely basing the value of a life on what economic contribution can be extracted, is the first step to understanding that we all have a greater contribution to society than what can be measured by our dollar. By treating each other with mutual respect we create the conditions for that value to be realized.

I worked with Becka on a shoot recently. I had a blast with her and the photos were nothing less than amazing. The one…