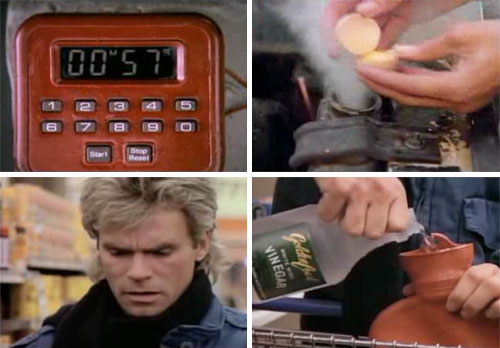 Do you remember MacGyver? It was a TV show in the late 80’s with a secret agent who basically could build just about anything with duct tape, a swiss army knife and a few random objects that might be lying around. Watching an old re-run of this show will easily get you thinking about how you can put the miscellaneous items in your house to better use. But MacGyver’s creativity seems to occur in response to not having the specific tool to do what was needed, forcing him to craft something on the spot. It begs the question of whether necessity is the only mother of innovation. And if so, at what point does immediate access to resources begin to dampen creativity?

This doesn’t end with Macgyver. We see it all over the world with innovations happening in Sierra Leone with Kevin Doe’s radio, and in the Iraq war with improvised exploding devices, and perhaps even in your back yard with some kids building a fort or a tree house out of scraps of materials. One constant in each case is that all of these people are building something that, they could have gone out and purchased if they had the money to do so. The marvel of their creativity isn’t as much the final product that they created, but how non-apparent the solution they came up with was. In some cases it implies a profound sense of technical ability, and in others it make be a high level of resourcefulness, but the definition of creativity is to be able to make something out of nothing. We prize creativity because its ability to allow us to overcome the voids in our resource pool and make things in spite of this lacking.

Does this mean that those with great resource are not creative? Absolutely not, innovation comes in all forms throughout human history and persist today all over the world. At core, the spark of the innovations is no different but with great resource often comes the ability to scale or tackle much larger problems. Kevin Doe built a radio from scrap parts with very little formal training in the middle of Africa. The question that has been asked is What could that same mind accomplish with a higher quality education, and material resources? MacGyver is a resourceful guy in the television show but his character is a formally educated scientist and trained bomb technician so the fact that he is able to make incredible things out of common objects could be as a much a contribution of his education as it is creativity. Kevin Doe had little resource, MacGyver had plenty but both were incredibly creative.

Einstein is famously quoted as having said “Imagination is more important than knowledge.” but Einstein  also struggled with school early on and found alternative ways of educating himself outside of the traditional school system. His innovations were a product of his imagination, and that led his experiments, but experimentation is an educational method as well. Albert Einstein was very well educated,  but in a non institutional way, and seemingly because there were little limitations on his learning environment, there very little boundaries on his creative capacity.

If we see examples of creativity in both places, where people have a lot to work with, and also very little then it seems that the primary conditions for creativity to thrive are and abundance of time, and a particular need. The time is needed for education, or cultivation of some kind either formal, explorative, or experimental. The need is just a motivator and as scientists might call it, a stimuli. Motivation is key, because it propels your will to persevere and be patient.  This motivation exists in all of us as a part of our natural desire to maintain homeostasis and fulfill our basic human needs. Time however is not something that everyone has equal access to.

There are those of us that have the leisure time to pursue education in several fields because out food and shelter needs are being met, but there are many of us that do not. As a result, is it possible that creativity itself is stifled when we do not have adequate time to cultivate our imaginations. If we follow Eintstein’s logic then we should be providing ample time to imagine and develop these questions, because they will be mature into needs that should have to be filled.

Assuming that creativity is the driving force behind most of our human functions both economically, and culturally we should seek to avail proper conditions for creativity to thrive for as many of us as we can support. If not, we are limit our overall ability to grow as a result of shared innovations, and perspectives. The best thing about creativity as a resource is that it is 100% green and totally renewable.

All I Need Is In My Home

I am experimenting with shooting women in a way that shows their natural beauty. It is an exercise in capturing them  while undressed that…