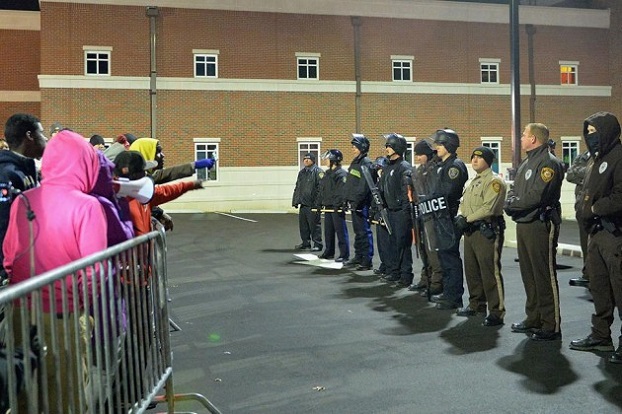 When the news broke that the grand jury in Ferguson, Missouri had ruled not to indict Officer Darren Wilson I was not waiting by the television for the report. I was not checking my social media feeds. I was not at a rally or protest. The news came to me while I was sitting at a bar playing Jenga with some friends of a friend, all of whom happened to be white.

One of the people sitting at the table pulled up their phone and said. “No indictment.” There were others that didn’t know what he was talking about so it was clarified “The Ferguson cop, he’s not being charged with anything.” It was mentioned, but not acknowledged. Not even by me. I knew in my head that something major had happened and I felt a wave of sadness wash over me for half a second. Personally, the sadness was not about the racial elements of the verdict, just the idea that Mike Brown’s family would have to come to terms with this decision and how it would disrupt their lives. But it was only half a second.

Here, the gathering continued. It was  jovial night, beers were being tossed back and we were all just shooting the shit. Who was I to kill the mood, and with strangers no less? I didn’t give it a second thought until I got in the car to ride carpool over to the next place for food. As the rest of the car chatted about current films, music, and motorcycles, I sat quietly on my phone scrolling trough a feed that was so filled with outrage, confusion, and even calls for violence that I was overwhelmed. I checked out, and decided that I couldn’t take all the negativity dampening my mood. The topic was not mentioned again all night.

When I got home, I decided to check back in on social media and see if anything had changed. I saw everything from MLK quotes to remain peacefully, to Malcom X quotes talking about lack of justice for Blacks in America. But there was an abundance of content related to the Ferguson case but still there was a fair about of dog pictures, selfies, and foodie shots. This major national topic, was only news to some.

It was then that I realized so clearly how difficult this battle is. The fight for equality, against racism and violence is completely uphill. Not simply because there is a militarized police force, and not even because of institutional racism, but because so many people just don’t care.

I could have halted the evening in that moment, and made place for the discussion about Mike Brown’s killing and what people’s thoughts were on it but I didn’t. Pin pointing the reasons why is multilayered, but the fact remains I said nothing.
And, judging from social media I wasn’t the only one, there were still tons of people black and white who were preoccupied with their body image, or drama with their boyfriend or kids first steps to worry about sharing something related to a news topic.

The view from here, is gloomy. Not only because interest is only moderate, but as interest increases so does polarization. As we begin to educate our selves and learn about the racial dynamics in America. It becomes clear that there are sides to be chosen. How and where you get your news quickly begins to frame our view points, and the world begins to seem more easily understood. It becomes “this” type of person is bad because they do these things. We must oppose them.

On the other side there is another group that is isolating behaviors to fit a social archetype. No where upon social media did I see anyone asking for critical self reflection, and if they were it was quickly refuted as sympathizing with the enemy. It is as if we can not be wrong while acknowledging the wrongs of others.

A young man was shot and killed after his alleged participation in a theft. When the decision not to charge the officer is released into the public, a partial response is to riot in the city where it occurred. The response to the verdict becomes newsworthy the next day. This mornings CNN headline was not about the social implications, or how the family must feel, or what happens next in the legal proceedings but was simply “Streets of Ferguson smolder after grand jury decides not to indict officer.”

This perpetuates the idea that blacks are violent which, could be seen as a contributing factor to the initial shooting and potentially the verdict itself. When the fact of the matter is that no one knows what all the facts were in the case except those in the grand jury and even then they may not know what was going through Darren Wilson’s mind when he shot Michael Brown.

We may not be responsible for the acts of the officer, not can we be responsible for the grand jury, or media depictions of blacks, or even systemic racism in the United States, but we are all responsible for out reactions to it all. And we must be aware of how our reactions will continue to shape the narrative that lives on regarding not, only this story, but all others. We must not let the response of the incident over shadow the opportunity for greater narrative on the issues of race in America. Anger is often justified, discrimination and prejudice are real, both in the forms of racial profiling and flat our targeting of blacks by police and that fact can not be undermined.

To truly move forward we must be aware of our tendencies, and emotions, and seek the course of action in all matters that will further propel our mission and best utilize our voice. We must be acknowledge our privilege and how that effects our perspective on civil rights progress, and we must also check out anger and note how it can cloud our vision.

I am saddened by feeling in my heart that says there is an absence justice in America for Michael Brown. My mind recognizes that we have a major issue with racism in this country, and yet that I do not know all the facts. I vehemently condemn looting, and have a distaste for anyone that supports a violent response to the decision. But, I am also disappointed by our countries repeated unwillingness to recognize the prevalence of racism in our society. I am deeply troubled by our great lack of concern for these matters as they pertain to our daily life.

*** The New York Times has published the grand jury transcipts, if you have any interest the link is here.***